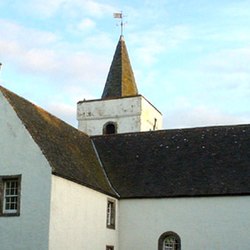 Yester is a parish in the south of East Lothian four miles south-east of the county town, Haddington. It contains Gifford, Long Yester, and Long Newton. This place, of which the ancient name was St Bothan's, derived its present name, soon after the Reformation, from the lands of the Marquess of Tweeddale, which lie partly within the limits of the parish, and consist of a fine valley on the banks of the Gifford water, and of which the Cambro-British Ystrad, now softened into Yester, is faithfully descriptive. Surrounding parishes are Humbie and Bolton to the west, Haddington to the north and Garvald and Bara to the east. To the south lie Berwickshire's Channelkirk and Lauder.

Several church buildings have been used throughout the history of the parish. The earliest recorded presence of a church in the area is in 1241, the ruins of which lie in the woods beside Yester House, to the south-west of the centre of Gifford. A church also once stood at Duncanlaw, a former settlement to the south-east of the main village. The present building dates to 1708, and stands in the centre of the village.

This East Lothian article is a stub: help to improve Wikishire by building it up.
Retrieved from "https://wikishire.co.uk/w/index.php?title=Yester&oldid=32200"
Categories: