Yelvertoft's main thoroughfare, called High Street, is approximately three quarters of a mile long, from the Parish Church of All Saints to the Village Hall. This linear street follows the course of an ancient Portway known as Salters Way. The Grand Union Canal passes close to the village. 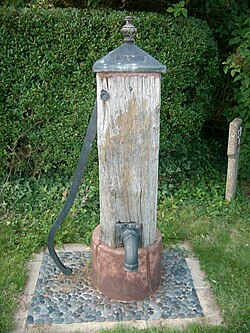 The town was recorded in the Domesday Book in 1086, where a priest was mentioned.[3][4] The name is derived from differing sources: 'Yelver' from the Saxon personal name Ceolfrith, possibly evolving later to 'Gelver'. The '-toft' suffix denoted a small settlement in Danish. Yelvertoft has a maintained a more independent, rural character compared to other villages in the region, such as Crick, because no major transport routes pass through it.[3]

Sites of historical interest include a monument built for the 13th century Rector of the All Saints Church, John Drycson, a charity school building constructed in 1792 (the school was established in 1711) which now serves as the Reading Room, and a town pump dating from 1900, which was renovated in 2000.

Yelvertoft has three churches (Anglican, Congregational, Roman Catholic), a primary school, a post-office and general stores, a butcher's shop, a public house, an Equestrian centre and many small businesses.

Recreational facilities include a cricket field and football pitch. The village hall also comprises a sports field and pocket park which includes a children's play area, a skate park and a basketball court.

This Northamptonshire article is a stub: help to improve Wikishire by building it up.
Retrieved from "https://wikishire.co.uk/w/index.php?title=Yelvertoft&oldid=45965"
Categories: