Woodham Mortimer is a village on the Dengie peninsula about three miles west-south-west of Maldon in Essex.

The discovery of a hoard of denarii dated to AD 41[2] is some evidence of occupation in Roman times. However, the village first appears in written records as "Wudeham" in c. 975. The name, which means "village in the wood",[3] is derived from the old English words "wudu" (wood in modern English)[4] and "ham" (home, or homestead).[5] At the time of the Norman Conquest the parish belonged to Ralph Peverell and was known as Little Woodham. Henry II gave the parish to Robert de Mortimer, leading to the change in name.[6]

In the Domesday Book the population was recorded as 14 households with the local lord in 1066 being Siward Barn.[7]

During the First World War a new aerodrome was opened in nearby Stow Maries to provide air cover for the London area. 37 Squadron, Royal Flying Corps occupied the base from September 1916 taking over The Grange in Woodham Mortimer as its headquarters.[8][9] The Grange was once the property of Beeleigh Abbey and is a Grade-II listed building.[10] 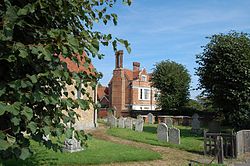 Woodham Mortimer has an average elevation of 167 ft above sea level and lies just south of the Danbury-Tiptree ridge that marks the furthest extent of the Anglian ice sheet during the last ice age approximately 450,000 years ago.[11] The geology of the area is rock, sand and gravels that were deposited by the retreating ice.[12] Gravel is commercially extracted from the Royal Oak Quarry with a proposed additional site at Tynedales Farm of 117 acres.[13] The National Soil Resources Institute at Cranfield University describes the main soil type as "slowly permeable seasonally wet slightly acid but base-rich loamy and clayey soils."[14]

There are two public houses, the Royal Oak on the A414 and the Hurdlemakers Arms on Post Office Road. Its name refers to the hurdles which used to be made from materials cut in the nearby woods.[15] There is a golf driving range with 9-hole pitch and putt that was opened in 1967[16] on Burnham Road. 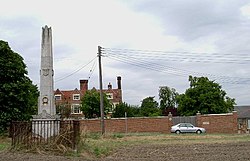 Next to the village hall is a one-acre playing field with swings and a small football pitch.[17]

The parish church is St Margaret's. The original church on the site may date from the 16th century, however, it was rebuilt in the 19th century leaving little evidence of the older church with only the south wall and east end remaining.

Evidence for the age of the church includes the 13th century font (although the base is newer) and the 17th century carvings on the pulpit. The church has a small window commemorating Queen Victoria's diamond jubilee. The graveyard includes the grave of Peter Chamberlen.[18]

Woodham Mortimer Hall is a 17th-century gabled house that Hugh and Peter Chamberlen lived in. There is a blue plaque fixed to the hall[18] noting them as pioneering obstetricians who invented the forceps. The hall passed out of the Chamberlen family in 1715 when the family home was sold.[19] The forceps were found in 1813 under a trap door in the loft of the hall and given to the Medical and Chirurgical Society which passed them to the Royal Society of Medicine in 1818.[19][20] The find was described by R. Lee in Observations on the Discovery of the Original Obstetric Instruments of the Chamberlens (1862) as:

The [space] contained some boxes in which were two or three pairs of midwifery forceps, several coins, a medallion of Charles I, or II, a miniature of the Doctor damaged by time, a tooth wrapped in paper, written on, "My husband's last tooth"; some little antique plate; a pair of ladys long yellow kid gloves, in excellent preservation; a small testament date 1645.[19]

There is a war memorial commemorating the nine people from the village who died during the World Wars. There is also a Grade II listed memorial erected in 1825 to William Alexander, who left his lands to the Worshipful Company of Coopers for the benefit of the poor.[21]