Stow Maries is a village and parish in the Dengie hundred of Essex. It is located on the western (inland) end of the Dengie peninsula.

The place-name 'Stow Maries' is first attested in the Feet of Fines for 1230, where it appears as Stowe. In a Feudal aid of 1420 it appears as Stowe Mareys. The name means 'place belonging to the Marisc family'. (Robert de Marisc held the manor in 1250. The name comes from Marais in France, meaning 'marsh' – the words are cognate.)[2]

An airfield was established at Stow Maries in September 1916 during the First World War for the Royal Flying Corps.[3] By 1919 the need for airfields lessened and Stow Maries was closed. The site was considered for development as an airfield during the Second World War but considered unsuitable due to the clay soil. Even though not opened it played a role nonetheless, being bombed by the Luftwaffe and used as an emergency landing site by a damaged Hurricane fighter plane.[3]

The airfield buildings are still mostly intact, with the original windows still in place. The buildings were used to store grain and farm vehicles until 2008. The airfield has subsequently been purchased by Steve Wilson and Russell Savory and is being restored to a state that it would have been found in 1919.[4]

Starting in 2014, to commemorate the Centenary of World War I, and in partnership with the 14-18 Aviation Heritage Trust and the Vintage Aviator Ltd The Vintage Aviator (both New Zealand), the WW1 Aviation Heritage Trust Ltd ("WAHT", United Kingdom) will bring 5–8 different World War I aircraft to the UK to tell the story of the technical and tactical aerial combat that occurred between allied and German aviators throughout the Great War. Subject to funding, WAHT will acquire a WW1 aircraft each year on behalf of the nation to tell the story of each year of the War at airshows and commemorative events in the form of air displays, flypasts and static diorama. It is planned that ultimately these aircraft will be based at the Stow Maries Great War Aerodrome in Essex supported by an apprenticeship scheme to foster the preservation and restoration of World War I aircraft and creating a centre of excellence dedicated to keeping the aviation legacy of the war alive. 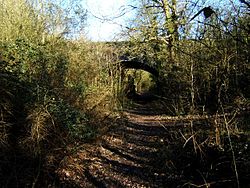 Stow St Mary Halt railway station on the Woodham Ferrers to Maldon branch line served the village until closure in 1939. The track has been removed and the area and an adjoining meadow are now managed as Stow Maries Halt nature reserve by the Essex Wildlife Trust. It can be reached from Church Lane. Ordnance Survey grid reference (TQ835991).[5]

Stow Maries has one public house, The Prince of Wales. There is a table tennis team, which trains in the Smythe Hall, many footpaths and the old railway line, part of which is used as a cycle route.

The local parish church is the Church of St Mary and St Margaret in the Maldon and Dengie Deanery, part of the Diocese of Chelmsford.[6]

The church has a 14th-century chancel and a 15th-century nave that was extended in the 16th century. Some refurbishment took place in 1870.

The Rectory House (now The Old Rectory) was built in 1799 and is thought to have been designed by Humphry Repton assisted by his son John Adey Repton.