From Wikishire
(Redirected from Wolds Top)
Jump to: navigation, search

Normanby Top or Wolds Top are names given to the highest point of the Lincolnshire Wolds, which also marks the county top of Lincolnshire.

Normanby Top is in Lindsey, a mile or so north of the village of Normanby-le-Wold. The Viking Way passes close by, on a minor road, and there is a radio mast near the summit. The summit is marked with an Ordnance Survey triangulation station, which was erected in July 1999 as part of the Ordnance Survey national GPS system. 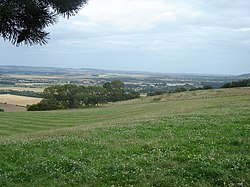 Looking down from the Top
Retrieved from "https://wikishire.co.uk/w/index.php?title=Normanby_Top&oldid=56306"
Categories: