Winwick is a small village and parish lying on the Huntingdonshire-Northamptonshire border, a quiet village in good farming country. It consists of a few houses clustered at the crossroads of the road between Great Gidding and Old Weston with that between Hamerton and Thurning. Winwick stands at a high point affording beautiful views of the surrounding countryside,

A number of village greens shape the layout of the village and beside one is a moat remaining on the site of the former manor house.

The parish church is All Saints, once a companion to the vanished manor house. It is partly of the 12th century, its south doorway is of that date, but largely of the 13th and 14th centuries. The chancel and nave were rebuilt in the mid-13th century, and elements form later centuries, including Victorian work.

There is also a small and peaceful Quaker cemetery.

There are just the two through roads in the village and a back-lane. A great many footpaths though lead out from the village, into Northamptonshire and out across the Alconbury Brook to Little Gidding. 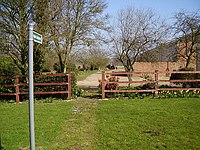