Little Gidding is a small village in Huntingdonshire, near Sawtry. It is one of the three Giddings, with Great Gidding and Steeple Gidding.

The village is little more than a couple of houses and the parish church, all on a little lane ending in the fields, a spur of the minor through road running southeast from Great Gidding.

Little Gidding was formed as separate manor from Great Gidding soon after the Domesday survey. In 1279 Little Gidding had 600 acres under cultivation, and 31 households living either side of the street which ran from the present main road to a point in the wood behind the church.

In 1348 the plague left Little Gidding deserted. By 1566 there were 6 households, but even without plague, the village was declining as fields with enclosed and livestock grazed, needing fewer farmhands. In 1594 there were no houses left in the village.

Little Gidding was the home of an Anglican religious community established in 1626 by Nicholas Ferrar, lord of the manor. The Ferrar household lived a Christian life according to High Church principles and the Book of Common Prayer. The fame of the household was widespread, and they attracted visitors. King Charles I visited Little Gidding three times, including on 2 May 1646 seeking refuge after the Battle of Naseby. The religious community ended with the death of John Ferrar in 1657.

The parish church, made famous by T S Eliot, is St John's. In 1185, Maud Engaine granted Little Gidding church to the Order of Knights Templars, but it appears not to have yoielded them an income as intended. When the Order was dissolved in 1312, the church passed to the Knights Hospitaller, until their dissolution in 1554 at the Reformation.

In 1625 when the Ferrars family bought the Manor of Little Gidding, they found the church and house in ruins and rebuilt them. 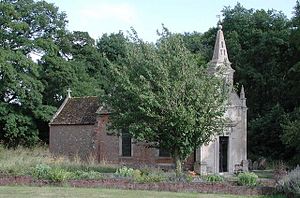 The moment of the rose and the moment of the yew-tree
Are of equal duration. A people without history
Is not redeemed from time, for history is a pattern
Of timeless moments. So, while the light fails
On a winter's afternoon, in a secluded chapel
History is now and England

T S Eliot visited St John's Church in 1936. The history of the church and of the community founded by Nicholas Ferrar helped to inspire Eliot to write the poem Little Gidding in his Four Quartets, completed in 1942 . In the poem he refers to the "broken king" Charles and relates the struggles of the English civil war to the events of the Blitz in Second World War.

An annual T S Eliot Festival[1] is organised by the Friends of Little Gidding and the T S Eliot Society.