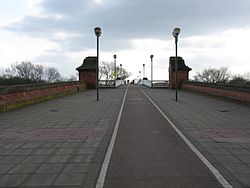 The bridge deck after widening to carry the tramway

Wilford Toll Bridge, locally referred to as the 'Halfpenny Bridge',[1] is a tram, pedestrian and cycle bridge in Nottingham. It crosses the River Trent between the Meadows and Wilford. It originally opened as a toll bridge for general traffic in 1870, but was closed when declared unsafe in 1974. Following demolition of the central span, a narrower footbridge and cycleway was opened in 1980. The bridge was once again widened to accommodate an extension of the Nottingham Express Transit network in 2015.

Parts of the northern side of the bridge are Grade-II listed building, including the former toll house.[2][3][4]

Until the bridge opened a Wilford Ferry was in operation for some 400 years. This ferry was the scene of a disaster in 1784, when in the midst of a gale an overcrowded ferry boat capsized, and six unfortunate passengers were drowned.[5]

Another fatal accident occurred on 10 January 1837 when John Oakley, a Wilford farmer, and two others used another boat which drifted downstream and capsized when it hit the ferry chain.[6]

An act of parliament was obtained in 1862 for the construction of a bridge.[7] The ferry service ended on 18 September 1864, when a temporary wooden footbridge was opened.

The toll bridge opened on 16 June 1870.[8] It was built by Sir Robert Juckes-Clifton, 9th Baronet for the traffic for Clifton Colliery.[9] The bridge was a cast-iron structure by Andrew Handyside of Derby.[10]

The toll house was designed by the architect E.W. Hughes. It is built of red brick, ashlar dressing and steep hipped slate/lead roofs, and as of 2012 is used as a sandwich shop.

The bridge was owned by the Clifton family until Nottingham City Council took over in 1969. The piers have the Clifton arms on the inward facing walls.

The council assessment revealed that bridge was in a poor condition and it was closed to traffic in 1974. The centre span of the bridge was demolished and replaced by a narrower foot bridge, of steel girders with an in-situ reinforced concrete deck slab, in 1980.[11] The bridge was then used as a footpath and cycleway, with a gas main and cable services under the deck.

During 2014 & 2015 the bridge has been enlarged to carry Phase 2 of the Nottingham Express Transit system. This involve widening the central portion from 18 ft 6 in to 40 ft and strengthening to allow a two-way tram system, and a replacement for the new pedestrian and cycle paths.[12]

On the toll house is a sign which reads: