Wilford is a village close to the centre of the city of Nottingham. It is bounded to the north and west by the River Trent and to the east by the embankment of the now-closed Great Central Railway. The now-demolished Wilford Power Station was located on the north bank of the river.

Remains of a paved ford, bordered by oak posts, were found in the Trent at Wilford in 1900. The settlement is named as Willesforde in Domesday Book, owned by William Pevrel of Nottingham Castle, who also owned the lands of nearby Clifton. It had a fishery, a priest and 23 sokemen. The land passed to the Clifton family in the 13th Century.

Wilford retained its identity as a village until the later 19th century. Surrounded by woodlands and with riverside amenities such as the Wilford Ferry Inn, the village attracted many visitors from Nottingham. Spencer Hall, the Nottinghamshire poet, wrote in 1846 "Who ever saw Wilford without wishing to become an inmate of one of its peaceful woodbined homes."

In 1870 the Clifton Colliery opened on the north side of the Trent, and the area opposite Wilford became industrialised. By the end of the century the village had changed character, with modern brick-built houses replacing old thatched cottages.

The Silverdale housing estate was built on the southern edge of Wilford on farmland. An adjacent estate, Compton Acres, was built in 1986.

The church of St Wilfrid serves a parish covering Wilford, Silverdale and a large part of the Compton Acres estate. 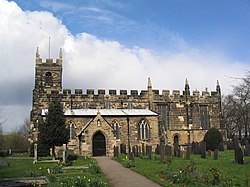 The church contains two memorials to the Nottingham poet Henry Kirke White who drew much of his inspiration from Wilford and Clifton.

Within the area of Wilford, there are two Primary Schools:

Wilford is served by two stops of the Nottingham Express Transit system. Both |Wilford Village and Wilford Lane stops are on line 2, linking the city centre to Clifton, and opened in August 2015.[2][3]

Wilford has a number of sports clubs for football, rugby, basketball, bowls and archery.

Wilford has a Co-operative Local Store, a Social and Bowls Club, the Wilford Green Pub, the Ferry Inn (a branch of the Chef and Brewer restaurant chain) and the Wilford Farm Harvester (a restaurant of the Harvester chain).

Close by is the Gresham Sports Pavilion which includes an all-weather football pitch, and indoor changing facilities. Across Wilford Toll Bridge is Victoria Embankment, which hosts the annual Riverside Festival, the War Memorial and park, and a children's play-area and large paddling pool. The toll bridge was converted to a foot bridge in the early 1970s.

Gleeds, an architects and surveyors company has its headquarters here. A number of companies are based at Wilford Industrial Estate, including Seriff, a large supplies distribution company, and A. W. Consulting, a small marketing consultancy, owing to the area's proximity to the A52 and access to the M1.

Their corpses were decapitated with an axe.[5]