Wilburton is a village of just over 1,000 inhabitants, in the isle of Ely, Cambridgeshire. It is to be found 6 miles south west of Ely.

While nominally an agricultural village, many of the inhabitants work in Cambridge, Ely or London.

The village appears as Wilburhtun in 970 and Wilbertone in the Domesday Book of 1086.

The name means 'Wilburh's Farmstead",[1] apparently after the same Princess Wilburh whose name is found in the Wilbrahams in the south of the county. Wilburh is said to have been a daughter of King Penda of the Mercians.

Wilburton parish extends to around 800 acres. The village stands on the important mediæval route from Earith to Stretham, while its lands extending south to the river, the Great Ouse. North of the village is the broad extent of Grunty Fen.

As much of the land in the region is fenland, the village's position on the ridge between Stretham and Haddenham at the southern end of the Isle of Ely was important in its growth and success.[2]

Unusually for the area, the village contains a number of attractive old buildings, and was described in the 19th century as "very neat and contains some excellent houses".[3] These include the Burystead (the former manor house, built c.1600), one of the few surviving half-timbered houses in the region, and the Victoria Place row of cottages.[2]

For the last few hundred years, the Pell family were the prominent local landowners, sponsoring the somewhat optimistic Ely and St Ives Railway in the late 19th century. Wilburton railway station, built in 1866, has been open for goods trains only since 1931.[2] 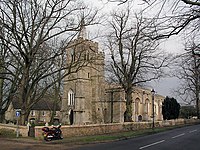 The parish church, dedicated to St Peter consists of a chancel, north vestry and organ chamber, a nave, north chapel, south porch, and west tower. The chancel arch and tower date from the 13th century and the extensive rebuilding in the second half of the 15th century produced the chancel, vestry, nave, and porch. The organ chamber and north chapel were added in the late 19th century. The three-storey tower contains five bells, all dating from the 17th century.[2]

Their village is home to a fine Elizabethan manor house, a shop, and a garden centre. There is one public house, The King's Head. There is also a hall called St Peter's Hall that is used for events by the local community, such as school plays, wedding receptions, and after-school clubs. Adjoining St Peter's Hall is a social club.

The village holds a fireworks display around Guy Fawkes Nght and a beer festival in the summer. In 2005 it also held its first spring beer festival.

Wilburton is also well known for its notable football teams, in 1996 Wilburton Blades F.C were formed under the careful leadership of local businessman Barry Star, the Blades were most well known for their U/14 side that reached 3rd place in the Cambridgeshire colts league 97/98 season.

Wilburton F.C (Harlequins) are the only team still operating in Wilburton, they play in the Sunday Alliance league.

Notable players for Wilburton teams is William Ludbrooke who has won the golden boot award on three separate occasions and continues to play for Wilburton F.C to the present day.