From Wikishire
Jump to: navigation, search
Not to be confused with Streatham in Surrey

Stretham is a small village four miles south of Ely in Cambridgeshire. It is a fen village, built like so many hereabouts on a fen island, a small rise above the sea-level of the old fens. Its chief attraction is Stretham Old Engine, a steam-powered pump used to drain the fens. The pump is still in use today (for the fens would flood once more without constant attention) although converted to electric power. It has open days throughout the year.

The parish church is St James's. Parts of the church are 14th century though it was heavily restored in the 19th century.

Monuments include a tomb lid with an inscription which refers to Nicholas de Kyngestone, rector late 13th century; a brass to Joan Swan, 1497; a black marble slab for Anne Brunsell, 1667, wife of a rector, and sister of Sir Christopher Wren.[1] The church is part of the Ely team ministry along with the nearby St George's Church, Little Thetford.[2] 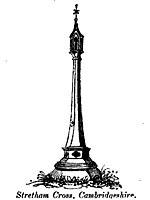 The skeletal remains of a 130 million year old Upper Jurassic Pliosaur were discovered in a 5-foot deep Kimmeridge Clay pit in the village in 1952 by workers of the Great Ouse River Board.[3] This particular example, 23 feet long, was named Stretosaurus macromerus in honour of the village where it was found.[4][5]

The Domesday Book records the village as Stradham, and states that it was held by the Abbot of Ely. It had fisheries.[6]

The Stretham steam pumping engine, built in 1831 by Butterley Company, was one of the largest beam engines in the Fens; at 15 rpm it generated 105 horsepower lifting 30 tons of water per revolution, or 450 tons per minute.[7]

During the river floods that began in mid-March 1947, and which affected over 1,000 square miles, after a late thaw was joined by heavy rains, the pumping station at Chear Fen near Stretham was called into action but ran only for a short time when one of the boilers broke down completely and the other boiler could not raise pressure. In 1950, a new pumping station was opened.[9] 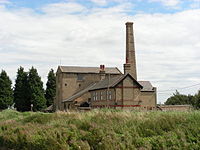