From Wikishire
(Redirected from Widdrington, Northumberland)
Jump to: navigation, search

Widdrington is a village in Northumberland about six miles north of Morpeth and close to the North Sea coast on Druridge Bay. The village is on the A1068 coastal route between Blyth and Amble and beyond.

This is a close-knit village, originally a small village with a single hilly lane of cottages running up the slope, with a pub, farm shop, and the parish church.

A mile to the south is Widdrington Station, a daughter village built around the village railway station but which has become bigger than the original village. It is the original Widdrington which has the history and the sights, amongst them the parish church and the site of a fallen 18th-century castle, Widdrington Castle, a Scheduled Ancient Monument.[1]

The parish church, Holy Trinity, is a Norman-style church, built in the 12th century. Today it is a Grade I listed building.[2] The vestry has re-set mediæval door to the north with a pointed chamfered arch, and 13th century cross slab as a lintel.

Inside the church are a two-bay north arcade that has pointed double-chamfered arches, hooded towards nave, on a round pier; a moulded capital pillar with a square abacus: a three-bay arcade on south with octagonal piers. Chancel arch and arch dividing south aisle from chapel also spring from the eastern pier. There is a cut-back stoup by one door and a hollow-chamfered font in the south chapel. The chancel has a Victorian arch to its organ chamber and a moulded sill string on east, stepped down at south end. Sill of south window lowered to form sedilia with integral shelf and pillar piscina, with a trefoiled hollow-chamfered arch, shelf and lockers. Two tomb recesses on north have keeled mouldings and moulded hoods: the eastern has a pointed arch with Widdrington arms at the apex, the western has a lower segmental arch and a small cross slab set into its sill.

The impropriation of tithes before commutation belonged to the Mercers' Company and the incumbent priest of Hampstead in Middlesex. The chapel had parochial limits as early as 1307 and was originally dedicated to St. Edmund; at the Dissolution it became Holy Trinity chapel, from which period it continued to be dependent on Woodhorn until 1768.

This place was long the seat and chiefly the estate of the Widdrington family, many of whom at various periods greatly distinguished themselves against the Scots, and on other occasions. Sir William Widdrington, in 1642 was expelled from the House of Commons for raising forces in defence of Charles I, who elevated him to Baron Widdrington; after the Battle of Marston Moor, he left the kingdom, when his estates were confiscated by parliament, but returning in the service of Charles II, he was slain at a reinvigorated Royalist battle in Wigan. William, the 4th Lord, was attainted in 1715 for his part in the Jacobite rebellion of that year, and his property, some £100,000, was sold to all willing bidders; thus consummating the downfall of a family that had flourished during a space of seven centuries. The ancient castle, which stood in a noble park of 600 acres, was razed to the ground about 60 years after this, and a newer edifice, in 1848, much out of repair and uninhabited, was demolished in 1862.

The parish seceded from the parish of Woodhorn and was only invested with distinct parochial rights in 1768.[3] 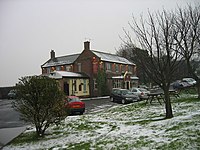 The church was repaired by Sir George Warren, in 1768, and comprises a nave, chancel, and south aisle; the chancel has an oratory or chantry porch projecting from it on the south, lit by two windows. There followed another 'nonconformist' place of worship that is now the United Reformed Church. William Mitford of Bullocks Hall was buried in 1783 in the churchyard with an ornate, listed headstone with foliage, a cherub and pilasters.[4] Beside this are six table mausoleums, a headstone with shaped moulded top with sunk quatrefoil and inscription to George Craister 'of Woddrington dog kennel', c.1781 and another that has shaped top and well-cut inscription to William Taylor of Druridge of 1779.[5]

In 1843, a skeleton with the teeth intact and an urn were found in ploughing a field, at which time there were 447 inhabitants based on the research assembled by Samuel Lewis based on the 1841 census.[3]

In 1848 the whole village chiefly belonged to Lord Vernon, and comprised 4,902-acre estate, mostly tithe-free, of which a fifth was pasture. The benefice is a perpetual curacy, which was in the mid-19th century in the gift of Lord Vernon.[3]