Anglesey Abbey is a country house in the village of Lode, 5½ miles northeast of Cambridge. It was once the site of a priory, dissolved at the Reformation, and developed into a Jacobean house.

The house and its grounds are owned by the National Trust and are open to the public as part of the Anglesey Abbey, Garden and Lode Mill property, although some parts remain the private home of the Fairhaven family.

The 98 acres of landscaped grounds are divided into a number of walks and gardens, with classical statuary, topiary and flowerbeds. The grounds were laid out in an 18th-century style by the estate's last private owner, the 1st Baron Fairhaven, in the 1930s. A large pool, the Quarry Pool, is believed to be the site of a 19th-century coprolite mine. Lode Water Mill, dating from the 18th century[1] was restored to working condition in 1982 and now sells flour to visitors. 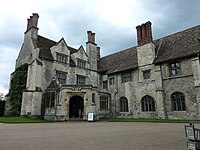 Visitor entrance at rear of house

The 1st Lord Fairhaven also improved the house and decorated its interior with a valuable collection of furniture, pictures and objets d'art.

Lode Mill is a working watermill in the Abbey grounds. It was built 200 years ago and has been in operation since; most of its current working parts are about 150 years old.

Today's mill is positively modern though, at just a couple of centuries, for there has been a mill on this site for around a thousand years. The Domesday Book lists a mill here. 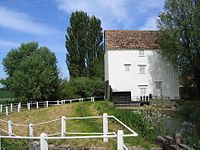 Lode Mill, situated on the edge of the gardens

A community of Augustinian canons built a priory here, known as Anglesea or Anglesey Priory, some time during the reign of Henry I (thus between 1100 and 1135), and acquired extra land from the nearby village of Bottisham in 1279. The canons were expelled in 1535 during the Dissolution of the Monasteries.

The former priory was acquired around 1600 by Thomas Hobson, who converted it to a country house for his son-in-law, Thomas Parker, retaining a few arches from the original priory. At that time the building's name was changed to "Anglesey Abbey", which sounded grander than the original "Anglesey Priory".

In the late 18th century, the house was owned by Sir George Downing, the founder of Downing College, Cambridge.

Further alterations to the building were carried out in 1861.

Huttleston and Henry Broughton bought the site in 1926 and made improvements to the house. They were the sons of Urban Broughton (1857–1929), who had made a fortune in the mining and railway industries in America. Henry married, leaving the abbey to his brother, then 1st Lord Fairhaven, in 1930. Henry became the 2nd Lord Fairhaven. Huttleston used his wealth to indulge his interests in history, art, and garden design, and to lead an eighteenth-century lifestyle at the house. On his death, Huttleston left the abbey to the National Trust so that the house and gardens could "represent an age and way of life that was quickly passing". 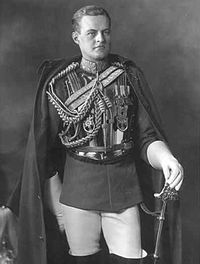 Huttleston Broughton (whose full name was Urban Huttleston Rogers Broughton) was born in 1896 in Fairhaven, Massachusetts. His father, Urban Broughton, had amassed a considerable fortune. His mother was Cara Leland Rogers the daughter of multimillionaire American oil magnate Henry Huttleston Rogers. Rogers had died unexpectedly in 1909 and Urban Broughton had taken over the management of a large part of the Rogers empire.[2]

The Broughton family had moved to Britain in 1912 when Huttleston was sixteen. They resided in Park Lane, Mayfair. Huttleston was educated at Harrow and the Royal Military College at Sandhurst. In 1916 he became a lieutenant in the First Life Guards. He served during the First World War and retired from the military in 1924.[3] A photo of him in his full dress uniform is shown on the left. He later obtained the title Baron Fairhaven in 1929.

In 1926 he bought Anglesey Abbey. The advertisement for the sale of the Abbey which appeared in the London Times in 1926 is shown on the left. He fully restored the house which had fallen into disrepair and began to collect beautiful furniture, artworks and statuary. All of these can be seen at the Abbey today.

One of Huttleston's great achievements was the establishment of the garden at the house. In 1964 when Huttleston was still living Lanning Roper wrote a book entitled "The Gardens of Anglesey Abbey".[4] In the book he outlines the careful planning of this remarkable garden with its many vistas, avenues, rare and common trees, pools, statues and river temples. He describes the way in which huge areas of sky and mown grass have been used to balance symmetrical planting and how Broughton used the trees and shrubs to make groups of contrasting colour and foliage.

To commemorate the coronation of King George VI and Queen Elizabeth in 1937 Huttleston planted an extensive avenue of trees with a crossing avenue at the far end. The trees used were London plane alternating with horse chestnut in four rows copy that planted in Windsor Great Park.[5] This arrangement is now called Coronation Avenue at Anglesey Abbey.

Huttleston did not marry and had no heirs. He died in 1966 and left Anglesey Abbey to the National Trust.

The name Anglesey is unrelated to the island of that name, though it is suggested that there may be a similar etymology. Anglesey Priory was built on what was, before improvements in the drainage of the area, an island, hence the suffix -ey, meaning "island". Angle- is of uncertain origin; the romantic suggestion is that this was an island of Englishmen in a fenland inhabited by native Britons, but we can never know. 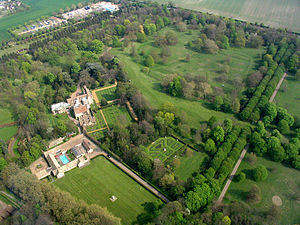 Aerial view of the house and gardens

The extensive landscaped gardens are popular with visitors throughout the year. The most visited areas include the rose garden and the dahlia garden, which contain many dozens of varieties. Out of season the spring garden and winter dell are famed nationally, particularly in February when the snowdrops first appear.

The lawns of the South Park are mown less frequently and this allows the many wildflowers to flower and set seed. Over 50 species of wildflower have been recorded, including Bee Orchid, Twayblade, Pyramidal Orchid and Common spotted orchid. In mid-summer, there are large numbers of butterflies such as Meadow Brown, Gatekeeper, Small Skippers and Marbled Whites.