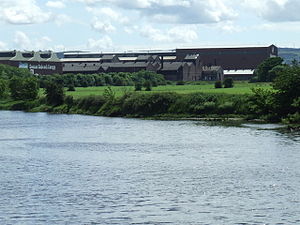 The River Cart is a river of Lanarkshire and Renfrewshire which is a tributary of the River Clyde; it joins the Clyde from the west roughly midway between the towns of Erskine and Renfrew.

In 1840 the ½ mile Forth and Cart Canal was opened, linking the Forth and Clyde Canal at Whitecrook near Clydebank to the River Clyde, opposite the mouth of the River Cart. The aim was to provide a direct link between Paisley, Port Dundas, Edinburgh, and the Firth of Forth.[1] 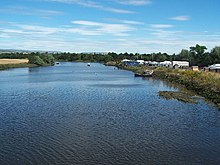 The Black Cart Water originates at Castle Semple Loch in Lochwinnoch, Renfrewshire. From there, it flows northeast to Johnstone; and then under the M8 motorway at Blackstoun, where it is joined by the River Gryfe. The river then flows parallel with the main runway of Glasgow International Airport; passing under the A8 at Renfrew by means of a stone bridge, where it joins the White Cart Water. 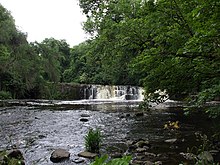 The White Cart Water originates on the edge of Eaglesham Moor in Renfrewshire. It then flows northwards around the south of East Kilbride to Waterfoot. The river forms the boundary between Renfrewshire and Lanarkshire here before running through the centre of the village of Busby after which it runs around the eastern side of Clarkston and Netherlee.

Below Netherlee the White Cart Water comes into Linn Park, heading downstream to Cathcart. Here, the river turns west, flowing through Pollokshaws and cutting through Pollok Country Park, under the M77 motorway towards Crookston, where it is joined by the River Levern. From Crookston, the river passes the grounds of Leverndale Hospital and then crosses into Renfrewshire and flows through the farmlands of Hawkhead, Paisley, parallel with the Paisley Canal railway line.

On entering the town of Paisley, the river falls over rapids called The Hammills, and flows under two roads, to emerge in the town centre at Paisley Abbey. It then passes under Gauze Street, the Piazza Shopping Centre and Paisley Gilmour Street railway station where it emerges from the Abercorn Bridge, a wide, high arched red sandstone bridge at Old Sneddon Street. From there it runs, mostly hidden from view, towards Glasgow International Airport and Renfrew.

In the town of Paisley the White Cart is joined by a number of tributary streams including the Lady Burn, the St Mirin Burn, the Sneddon Burn and the Espedair Burn. Just outside the burgh boundary, close to Glasgow Airport, the river meets with the Abbot's Burn. 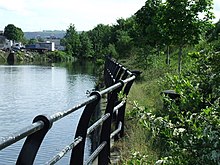 A major flood alleviation scheme is currently under construction by Glasgow City Council to protect vulnerable property on the south side of Glasgow.

Paisley Abbey has a mediæval drain, belonging to the monastery, which was rediscovered in the 1990s; and excavated by archaeologists.[2] The abbey/monastery drain linked with the White Cart Water both upstream and downstream of the abbey, near to where the Town Hall now stands. The White Cart Water provided both drinking water for the monastery and was used to flush away kitchen waste and the latrines.[2]

The River Cart and the White Cart Water are navigable to Paisley; being blocked in the 1960s, at Sneddon Street, by the aqueduct under the Piazza Shopping Centre.

The Paisley Beer Duties Act 1753 provided for "laying a duty of two pennies Scots, or one sixth part of a penny Sterling, on every Scots Pint of Ale and Beer which shall be brewed for sale, brought into, tapped or sold within the Town of Paisley and Liberties thereof, in the County of Renfrew, for improving the Navigation of the River Cart, and for other Purposes".[3]

A further Act of Parliament[4] was obtained by the Cart Trust for the river's improvement in 1787, in response to pressure from Paisley's shipbuilders.[1][5] This led to some improvements around Inchinnan. The first steamer serviceto Paisley, provided by the Prince of Orange, started in July 1815.[6]

The original Swing Bridge, at Inchinnan, on the Turnpike road, now the A8, was opened in 1838; the mechanism for swing bridge was made by Barr and McNab of the Abercorn Foundry, Paisley.[5] A year earlier the, Scotch gauge, Paisley and Renfrew Railway had opened between Paisley Hamilton Street railway station|Paisley Hamilton Street and Renfrew Wharf.[7] The railway was intended to both enhance the capabilities of the River Cart navigation as well as competing against it for goods and passenger traffic. The Cart Trust later went bankrupt.

In January 1866 the Paisley and Renfrew Railway was temporarily closed. When it reopened as a Standard gauge railway it was linked to the Glasgow and Paisley Joint Railway at Arkleston Junction. As a result, Hamilton Street station closed.[7]

Paisley's harbour was extended and the re-opening in April 1891 was celebrated by a fleet of steamers sailing from Paisley to Rothesay.[6]

The swing bridge at Inchinnan was replaced by the present bridge in 1923;[5] it was made by Sir William Arrol & Co.[5] It lifts vertically so it is more of a Bascule bridge than a Swing bridge, but it is still known as the swing bridge. It is still capable of opening, as the Babcock and Wilcox (now Doosan Babcock) factory at Renfrew requires the capability to move large loads by river.

Sir William Arrol and Co also made the pedestrian lifting bridge across the White Cart Water at Carlile Quay (off New Sneddon Street) but this has been disabled from lifting for over 30 years and has been closed to traffic since 1997, the structure being deemed unsafe.

An Act of Parliament was obtained in 1938 by the Ministry of Transport, the Admiralty and the Ministry of Shipping. A harbour was built at Laigh Park (Laighpark harbour) at which large cargo boats / ships could load and unload; it was linked to the Paisley and Renfrew Railway. This was used extensively during Second World War. Carlile Quay being used for smaller boats. The navigation lights were also upgraded.

The harbour fell into disuse in the 1960s and has been used as a scrapyard for many decades. Carlile Quay has been landscaped, refurbished and made more attractive to pedestrians. Apartment buildings and houses have been built on the vacant site adjacent to the quay.