Westward Ho! is a seaside resort village near Bideford on the rugged north coast of Devon, on the A39 road. The village lies at the south end of Northam Burrows and faces westward into Bideford Bay, opposite Saunton Sands and Braunton Burrows.

Westward Ho! is known for its surfing seas and the long expanse of clean sand backed by a pebble ridge and grasslands which extends for about three miles.

The seaward part of the village lies within the North Devon Coast, an Area of Outstanding Natural Beauty. 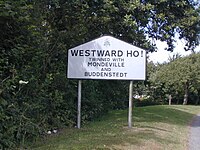 The village name comes from the title of Charles Kingsley's novel Westward Ho! (1855), which was set in nearby Bideford. The book was a bestseller, and entrepreneurs saw the opportunity to develop tourism in the area. The Northam Burrows Hotel and Villa Building Company, chaired by Lord Portsmouth, was formed in 1863, and its prospectus stated:

"This Company has been formed for the erection of a Family Hotel, on an Estate purchased for the purpose immediately contiguous to Northam Burrows, and of Villas and Lodging Houses for Sale or Lease. The want of such accommodation has long been felt, and as no attempt to supply it has hitherto been made by individuals, it is deemed to be a legitimate project to be undertaken by a Company. The salubrity and beauty of the North of Devon have long been known and appreciated. Sir James Clark has placed it in the highest position for health-giving qualities; and the recent publication of Professor Kingsley's "Westward Ho" has excited increased public attention to the western part, more especially, of this romantic and beautiful coast. Nothing but a want of accommodation for visitors has hitherto prevented its being the resort of families seeking the advantages of sea bathing, combined with the invigorating breezes of the Atlantic...."

The hotel was named the 'Westward Ho! Hotel', and the adjacent villas were also named after the book. As further development took place, it also acquired the name of Westward Ho![1][2]

The exclamation mark in the name of the village is this long inheritance from Kingsley's book: Westward Ho! is the only place-name in the British Isles with that odd distinction of containing an exclamation mark. (In Canada there is another: Saint-Louis-du-Ha! Ha!, in the Province of Quebec.)

Development of the village began ten years after the 1855 Kingsley novel was published, in order to satisfy the Victorians' passion for seaside holidays.[3] The United Services College was founded in the village in 1874.

Shell middens and a submerged forest that date to the Mesolithic period have been excavated on the shoreline at Westward Ho![4] 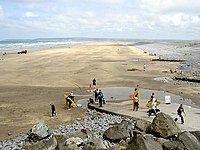 The beach, towards the Taw and Torridge estuaries

A railway served Westward Ho! from 1901 to 1917. The Bideford, Westward Ho! and Appledore Railway was a standard gauge railway which ran between these places, but had no connection with the rest of the railway system, though there was a pedestrian ferry link from Appledore to Instow which was connected to the rest of the rail network of Britain. A section of the trackbed is used as part of the South West Coast Path. 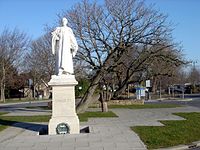 The Charles Kingsley statue in nearby Bideford

The Royal North Devon Golf Club is found here; the oldest golf course in England and Wales. Other attractions of the village include the arcades, a go-kart track and the Rock Pool a tidal lido.

Adapted Bailey Bridges were tested at Westward Ho! as part of the Mulberry Harbour project, as well as the Panjandrum by the Directorate of Miscellaneous Weapons Development.[5]

Rudyard Kipling spent several of his childhood years at Westward Ho!, where he attended the United Services College (later absorbed by Haileybury College, which is now in Hertfordshire). His collection of stories, Stalky & Co, published in 1899, was based on his experiences at the College.