West Wickham is a suburban town in north-western Kent within the conurbation stretching out from London. The town is 2½ miles from the centre of Bromley, the largest nearby town and a little more from Croydon in Surrey.

The town's origin is unknown, but it is recorded in the Domesday Book of 1086 as Wicheham. Its name is of Anglo-Saxon origin.[1] The town also lies on the line of a Roman road running between Lewes and London.

In Tudor times, the Manor House Wickham Court was expanded by the Boleyn family and the area was popular for deer hunting.

The railway came in 1882, a forerunner of future development which the railway facilitated.

Until the 1900s West Wickham remained a small village. The suburban building boom between the Wars however saw rapid development and the village was engulfed by the growing metropolis, West Wickham itself becoming transformed into a suburb popular with commuters. Building was stunted by the Second World War, but the process was completed when peace came.

Today's West Wickham is dominated by 1930s housing. Its high street has a good range of local shops, pubs and restaurants.

The Stocks Tree once stood opposite 'The Swan' and was so called because it was behind the village stocks that stood grim on the green). The stocks have long since gone and the Stocks Tree was cut down when a new road was built. A plaque carved of a piece of bark from the tree is now displayed in West Wickham Library on the High Street. 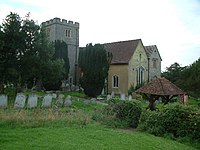 West Wickham is home to Beccehamians RFC a Rugby Union Club founded in 1933. Its ground is at Sparrows Den at the bottom of Corkscrew Hill. Other clubs nearby include Croydon RFC (formerly Shirley Wanderers), a club that has a rugby pitch used often for county matches.