West Stow is a small village in western Suffolk, a modest, pretty village on its own terms but famed for the West Stow Anglo-Saxon Village, a reconstructed early Saxon village built on the site of an actual Anglo-Saxon village excavated here, and which often hosts living history re-enactments of life at that period of the Dark Ages.

The village sits north of Bury St Edmunds, south of Mildenhall and Thetford and west of the villages of Culford and Ingham in the area known as the Breckland. The River Lark flows by the village and around the reconstructed village. West Stow was settled from around AD 420-650, and the Anglo-Saxon village imitates that period according to the traces actually found.

The name of the village is Old English, and the early Saxon village excavated was likely to have been known by the same name, coming either from 'West-stow' meaning "wester place" or Weste stow meaning "Deserted (waste) place".

A major archaeological dig from 1965-1972 headed by Dr. Stanley West of West Suffolk Archaeology Unit revealed a well preserved Anglo-Saxon site saved beneath the sands of the Breckland. The findings of Dr West contributed to much of the knowledge that is now known about this area. The layout of the area tells us much about the way of life in this time period. This area is set up with a large hall in the middle of the village and other houses and structures surrounding the area. This suggests that this was a very tight-knit community, with the inhabitants using the large hall for events such as feasts and story-telling. During the excavation 69 houses, 7 halls and 7 other structures were found. This community lived with their extended families in their houses, with each house usually containing around 10 family members. The people of this area still traded with their homeland, which is evidenced by the glass in the necklaces and other metals that were found at the site, but not produced locally.

The Anglo-Saxon community that was found here was not the first to settle in the area. The remains of circular huts with ditched enclosures suggest occupation by Iron Age farmers. There were also tools found that suggest that Mesolithic warriors had hunted in this area, and burial grounds and cultivation which suggest settlement of a Neolithic group.

A pagan Anglo-Saxon burial ground was also excavated. The archaeologists revealed that the village has moved the mile or so east to its current location following Christianisation. 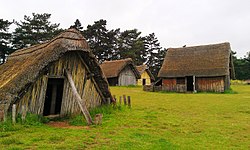 West Stow Anglo-Saxon Village is both an archaeological site and an open-air museum at West Stow. Here an early Anglo-Saxon village has been built on the maodel of the archaeological remains found at West Stow,and the experience of creating and (in some cases) living in the village has provided insight into life and work in the period, and a popular visitor attraction.

A small village stood on this site between the mid-5th century and the early 7th century, during the early Anglo-Saxon period. During this time, around 70 sunken-featured buildings were constructed on the site, along with 8 halls and a number of other features. Subsequently abandoned, the area became farmland in the Late Mediæval.

Antiquarian interest in the site began in 1849, when a nearby Anglo-Saxon cemetery was discovered. Subsequent excavations of Romano-British pottery kilns took place in the late 19th and mid-20th centuries, before the Anglo-Saxon settlement was revealed. The site was excavated between 1956 and 1972 by an archaeological team from the Ministry of Public Buildings and Works led first by Vera Evison and then by Stanley West. Following the culmination of excavation, it was decided to reconstruct the village on the site, an experimental archaeological project which has been ongoing since 1974. In 1999 the site was opened to the public with a new visitor's centre, museum and cafe. 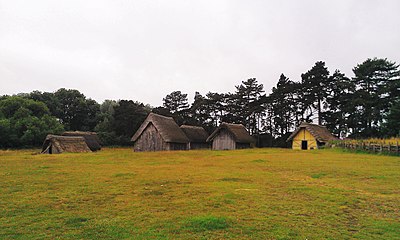 The reconstructed village, on the sloping hill

The village is on the north bank of the River Lark, adjacent to the modern village of West Stow. On a small hill 15 feet in height, it would have been noticeably prominent in the surrounding landscape; this hill formed a "core" for a sand dune that developed around it during the early 14th century and which sharply drops on the prevailing side while gradually sloping on the side which faces the prevailing winds. The steep southern slope is accentuated by a ditch at its base, which marks the edge of the river's flood plain.

The surrounding landscape as it appears today is radically different from the landscape that would have surrounded the area in the Iron Age and Early Mediæval periods.[1] The land to the north and east of the West Stow Anglo-Saxon village has been heavily modified during the construction of the Bury sewage farms, with the north-east corner of the site having been partly destroyed by a gravel pit in the 1950s. By the mid-1980s, the rubbish dumps that surrounded the site had been converted into a Country Park, with the landscape being regenerated with sedge, grass, birch and oak. The site of the settlement is also bisected by a row of pine trees that had been planted in the 19th century.[1]

Alongside the actual recreated village are the Archaeological collections formerly housed at Moyse's Hall Museum Bury St Edmunds. These are collections of archaeological findings that were made in the region between Devil's Dyke and the line between Littleport and Shippea Hill (along the borderline of Cambridgeshire with Suffolk) from the Stone Age, the Bronze Age and the Iron Age.[2] Findings include the Isleham Hoard of more than 6500 pieces of bronze, in particular swords, spear-heads, arrows, axes, knives, daggers, armour, decorative equipment (in particular for horses) and many fragments of sheet bronze, all dating from the late Bronze Age. The swords show holes where rivets or studs held the wooden hilt in place (studs were usually made of bronze except for commanders who had silver-studded swords or for a commander-in-chief who had a gold-studded sword).[3]

Early Anglo-Saxon West Stow was made up of timber buildings. Archaeological excavation of the site unearthed evidence for a variety of different constructions and areas at West Stow: 69 sunken-featured buildings, alongside 7 post-hole buildings interpreted as halls, traces of several lesser structures, a reserve area for clay, 2 large hollows or animal pens, pits, various unassociated post holes and several 7th century boundary ditches.[4] The Anglo-Saxon village showed no signs of the development of property boundaries until the last phase of occupation.[4] There was no evidence that the settlement was defended by fortifications.[4]

The majority of houses at West Stow belonged to a category of what the excavators called "sunken-featured buildings", a term first coined by Professor Philip Rahtz. In previous decades, buildings in this style had been known as "pit houses", "sunken houses" or "grubenhauser", but site director Stanley West noted that Rahtz's terminology had been adopted because it was "less contenscious" and provided "a non-functional description."[4][5] Seventy such sunken-featured buildings, or SFBs, were recorded at the site.[5] In early work it was believed that the houses were in holes, with the roofs above, and one such model was built at West Stow. Later work has suggested that the pits on which the houses were built were cellers, the house floors being at ground level, and the remaiing hosues are built in this manner. 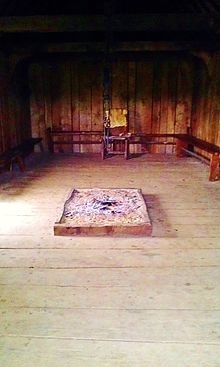 The interior of the reconstructed Hall

Seven larger structures, held up by wooden posts which left behind postholes have been interpreted as halls.[1][4] Five of these were located along the central spine of the hill, with the other two being positioned on the north side and south side respectively. All of the buildings were roughly positioned east to west, although the hall on the north slope was instead orientated north-west to south-east.[1]

A number of post-built structures were uncovered at the West Stow Anglo-Saxon settlement which were too small to be interpreted as Halls. These postholes tended to be clustered together, suggesting the possibility that they may have been used to repair small structures. No evidence of fencing was found on any of these structures, which were labelled Buildings 8 through to 14 by the excavators.[5]

The St Edmundsbury District Council planned to turn the area into a rubbish dump servicing the town of Bury St Edmunds following the culmination of excavation, a decision that was reviewed annually. Eventually they decided against this decision, forming the West Stow Saxon Village Trust, an experimental archaeological group, in order to reconstruct some of the Anglo-Saxon buildings in the hope of learning more about Anglo-Saxon building techniques and architecture. The work was undertaken by a group of undergraduate students from Cambridge University who called themselves the West Stow Environmental Archaeology Group. These experimental reconstructions ensured that they only made use of woodworking techniques and technologies that would have been available in Anglo-Saxon England.

One of the halls excavated at West Stow also provided the basis for a reconstruction erected at the Bishops Wood Environmental Centre near Stourport-on-Severn in Worcestershire; known as "Saxon Hall", it had taken 4 years to build, and was used to teach local schoolchildren about life in the Early Mediæval. It burned down in 2008 when an ember from a cooking fire set the building alight; John Rhymer, Head of Bishops Wood Centre, told press that he and his team were "devastated". However, the Hall was rebuilt over the following two years at a cost of £34,000. At its official reopening on 21 January 2011, the Anglo-Saxonist Stephen Pollington gave a speech in Old English while a historical reenactor, Paul Mortimer, appeared in character as Raedwald, King of East Anglia. Other attendees included Terry Herbert, who had discovered the Staffordshire Hoard in 2009, members of the Kidderminster Art Society and children on a school trip from Oxfordshire.[6][7][8]

The fan-made short film Born of Hope (2009), a prequel to the J R R Tolkien-based inspired film trilogy The Lord of the Rings, was largely filmed in West Stow Anglo-Saxon Village. 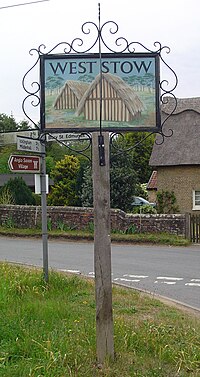