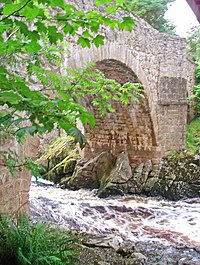 The Water of Feugh below the Bridge of Feugh near Banchory

The Water of Feugh is a stream in Kincardineshire that is the largest tributary to the River Dee, joining it at Banchory during the latter river’s passage through the north of Kincardineshire.

The Feugh rises in the Mounth, in an area known as the Forest of Birse, and has a particularly scenic aspect in a series of cascades at the Bridge of Feugh slightly above its point of discharge to the Dee.