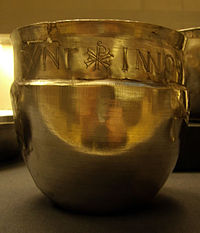 Durobrivae was a Roman fortified garrison town located at Water Newton in the very north of Huntingdonshire. It stood where Ermine Street crossed the River Nene: in later ages this was the location of the hamlet known as Dornford or Dornford Ferry, which disappeared in the modern era.

The Roman town would have been in the territory of the Corieltauvi tribe, in a region of villas and commercial potteries. The name is of the old British language, and essentially means "fort bridge".[1]

The origin of Durobrivae is said to have been as a vicus attached to a "pre-Flavian" fort, established about 500 yards to the east of modern Water Newton, between the Claudian invasion of AD 43, and the beginning of the reign of Vespasian in AD 69.[2]

The first historical mention of Durobrivae is in the Antonine Itinerary of the late 2nd century.[3]

Archaeology of the Roman period shows that Durobrivae was then the production centre for a fine tableware known as Nene Valley Colour Coated Ware, from the 2nd century to the 4th.[2]

A village persisted at the old Roman site long after the Romans had gone. In the Anglo-Saxon Chronicle the village here is named Dormceaster. From the Middle-Saxon period though local settlement came to centre on the nearby monastery at Medeshamstede, now known as Peterborough.

Into modern times there was a village, shrinking into a hamlet, known as Dornford, and by it, on the riverbank, was Dornford Ferry. The latter survived longest, just as a few cottages, until Dornford finally disappeared in the eighteenth or nineteenth century.