The underlying rock is present in a number of places on the hill. At 243 feet it is the same height as the nearby Little Trees Hill, although the latter is a more notable landmark.

The top stands in Wandlebury Country Park, a nature reserve owned by Cambridge Past Present and Future, formerly known as Cambridge Preservation Society.

Features of the hill

Wandlebury was already inhabited in the Bronze Age[1] and 2,500 years ago there was an Iron Age hill fort here known as Wandlebury Ring. This hill fort once had concentric ditches and earthen walls which were kept in place by wooden palisades. Although the fort has vanished, the ditch (the Ring) dug around the edge can clearly be seen and walked along, being 16 feet deep in places and offering an adventurous route along its edge. There is no evidence that it was ever used in hot defence.

Wandlebury House, home of among others, Francis Godolphin, stood within the Ring. The house has been demolished but the monumental stable block remains, now used for accommodation and as headquarters office of Cambridge Past Present Future. The grave of the Godolphin Barb horse, which died in 1753, can be seen under the archway. Maps and leaflets are available from the porch at all times and from a shed in car park on summer Sundays.

The tail of a crashed Second World War Wellington Bomber was visible wedged high in a beech tree within the estate, until it was dislodged by strong winds in the early 1990s.

The reserve, mainly beech woodlands and fields, is an excellent place for birdwatching and is a beautiful place for an early morning stroll. Banyard bird hide, overlooking Varley's Field, was completed in February 2012. Like Little Trees Hill, the summit is on public land and is accessible when sheep or Highland cattle are not in the field. Dogs must be on a lead everywhere in Wandlebury Country Park. It can be reached by walking across the field from post 3 of the nature trail. Virtually no climb is involved in the ascent, just a pleasant stroll through woodland. 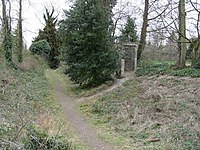 Footpath in the ditch of Wandlebury Ring 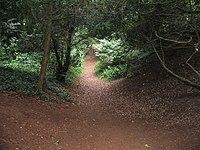 Of the three hillforts Cherry Hinton being one of them,[2] Wandlebury was the most important.[3] The site altitude is 203 feet above sea level.[4] There are at least two theories regarding why the Wandlebury Hill Fort was built on this site: it may have been chosen because of its tactical grounds, or because it would be the last fortress in a line which controlled the Thames-Stort-Cam Valley route.[5] Wandlebury overlooked the ancient Icknield Way.[3] The meeting point of the hundreds of Thriplow, Chilford, and Flendish is adjacent to Wandlebury.[4]

Wandlebury dates to the Marnian Epoch's second immigration.[2] The first hillfort was constructed in about 400 BC, consisting of "a substantial outer ditch and an inner rampart bank of chalk rubble and soil, enclosing a circular area of about 6 ha."[6] A second ditch and bank circuit was added on the inner side of the first rampart in the 1st century BC, and a low counterscarp bank added around the perimeter. The inner ring had a wooden palisading to deter invaders.[7]

Wandlebury was a border settlement.[2] There is evidence that it was occupied by the Romans.[6] The Romans built a road from Worts Causeway to Wandlebury.[8] Two pottery sequence have been found establishing two separate construction phases.[9] It may have been inhabited into the 1st century AD.[9] It was later named Wendlesbiri (meaning, "Wændal's fort")[2] in the Anglo-Saxon period and used as a Hundred moot meeting place. Sir Thomas Malory mentions a Wandesborow Castle in Le Morte Darthur (1470), probably referring to the Wandelbury Ring.[10]

The site has undergone considerable change since the 17th century.[11] When a house, garden and racing stable was built for King James II within the boundaries of the old fort in 1685, the inner rampart and ditch were levelled.[6] The mansion was later owned by Lord Godolphin and demolished in 1956, but the stable remains.[12] The site is now a country park.[3] 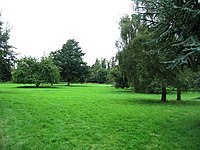 The fort and surrounding hills are shrouded in legends. Gervase of Tilbury said in his Otia Imperialia of 1214: "In England, on the borders of the diocese of Ely, there is a town called Cantabrica, just outside of which is a place known as Wandlebria, from the fact that the Wandeli, when ravaging Britain and savagely putting to death the Christians, placed their camp there, Now, on the hill-top where they pitched their tents, is a level space ringed with entenchments with a single point of entry, like a gate.

A very ancient legend exists, preserved in popular tradition, that if a warrior enters this level space at dead of nigh by moonlight and calls out 'Knight to knight, come forth', he will at once be faced by a warrior armed for fight, who charging horse against horse, will either dismount his adversary or himself be dismounted."[10] A knight named Osbert once tested the story and legend has it that he appeared in full armour and defeated the knight who appeared to him but was wounded in the thigh by his opponents' javelin on departing.[10] This is mentioned in Sir Walter Scott's 1808 poem Marmion featuring King Alexander III jousting with a goblin knight.[10] Another poet wrote a poem named Wandlebury Ring, a "nostalgic memory of a happy day in childhood spent at Wandlebury Ring with his family" and in memory of his father.[13]