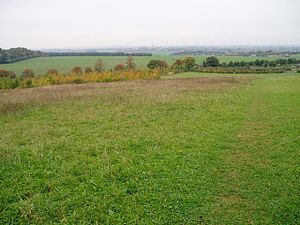 The view towards Cambridge from Magog Down

The Gog Magog Hills, also known as the Gog Magog Downs or simply the Gogs) are a range of low chalk hills, extending for several miles to the southeast of Cambridge. The highest points are marked on Ordnance Survey 1:25000 maps as "Telegraph Clump" at 246 feet, Little Trees Hill and Wandlebury Hill, both at 243 feet. The area is undefined but is roughly the elevated area lying north west of the 135 foot col at Worsted Lodge.

Unlike the nearby hills of the Newmarket Ridge, which have steep sides but very flat tops, these hills have large drops between summits and as such have quite a distinctive appearance; Little Trees Hill looks particularly good from Huckeridge Hill near Sawston. The hills therefore have relatively high prominence. Other tops include:

"Telegraph clump" functioned as one of the locations for the semaphore line between London and Great Yarmouth from around the 1820s to around 1850.

In 1989 the Magog Trust,[1] a charity and registered company created for the purpose bought 163½ acres of the Downs for £330,000 so it could be returned to chalk grassland and opened to the public.

However the bulk of the chalk downs have been converted to a golf course since 1901 by the Gog Magog Golf Club.[2]

Gog and Magog are biblical names and not native to the hills. One early source reports the hills as the 'mountains of Balsham' "which the students call Gogmagog. The earliest mention of the name "Gog Magog" for this region is found in a decree of 1574, forbidding students to visit the Gog Magog Hills on pain of a fine.[3]

Excavations around the hills revealed the remains of Iron Age defences at Copley Hill and Cherry Hinton, but the sites themselves may already have been occupied in the Bronze Age.[4] The better-preserved hill fort known as the Wandlebury Ring, now within a public park, had several concentric ditches and earthen walls, which were kept in place by wooden palisades. Wandlebury Ring was inhabited in the Bronze Age[5] and archaeological findings include bronze and iron objects and pottery, including "Knobbed Ware", dating from the Bronze Age.

Many bizarre theories have been advanced concerning the hills and their unusual name, including one author, Iman Wilkens, who claimed them as the site of Homer's Troy! The dowser Thomas Charles Lethbridge claimed to have found some ancient hill figures buried in the chalk under the surface of the hills, which he claimed to represent a sun-god, a moon-goddess and a warrior-god. Lethbridge's claims, however, were controversial and are not widely accepted.