Ury House is a large, ruined mansion in Kincardineshire, built in the Elizabethan style in 1885 by Alexander Baird. It is situated on the coast about a mile north of Stonehaven.

Originally the estate belonged to the Frasers, then the Hays starting in 1413, but eventually became the property of the Earl Marischal. Over the years Ury has been rebuilt three times.[1] In early times the property was known as Urie. In the 17th century Ury was established as the regional headquarters of the Quaker organisation by David Barclay.

Today the house is derelict and the dangerous condition of the structure limits entry. In March 2007, FM Developments lodged an amended planning application for a golf and leisure complex on the estate as the previous housing development was rejected in October 2006.[2] There have been earlier proposals for its restoration, including a 2004 planning application, which was rejected by the local Community Council.[3]

The estate in now owned by The FM Group who have recently lodged a planning application to the council for the creation of a world-class 18-hole Jack Nicklaus Signature Championship Golf Course as part of the redevelopment of the Ury Estate.

Bronze Age cists have been found at the site of the Ury House. Roman legions marched from Raedykes to Normandykes Roman Camp nearby as they used higher ground evading the bogs of Red Moss and low-lying mosses associated with the Burn of Muchalls. That march used the Elsick Mounth, one of the ancient trackways crossing the Mounth of the Grampian Mountains,[4] lying west of Netherley.

In this strategic tract of country, where the Mounth approaches the sea to constrict movement to a narrow path, there are several notable historic structures and sites close to the Ury House, including: 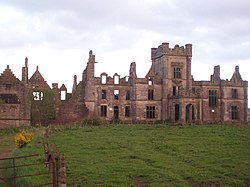 The main front of Ury House

Ury Estate is bounded on the west by Fetteresso Forest. Within about 150 yards south of Ury House is the confluence of the Burn of Monboys into the Cowie Water.