The Union Bridge, also known as the Union Suspension Bridge or Union Chain Bridge, is a suspension bridge that spans the River Tweed between Horncliffe in Northumberland and Fishwick in Berwickshire. When it opened in 1820 it was the longest wrought iron suspension bridge in the world with a span of 449.5 feet (137.0 m), and the first vehicular bridge of its type in United Kingdom.

Although work started on the Menai Suspension Bridge first, the Union Bridge was completed earlier. Today it is the oldest suspension bridge still carrying road traffic.

The bridge is on Sustrans Route 1 and the Pennine Cycleway.

1820 painting of the bridge by Alexander Nasmyth

Detail of the bridge, with entwined rose and thistle and the motto Vis Unita Fortior

Before the opening of the Union Bridge, crossing the river at this point involved an eleven-mile round trip by way of Berwick-upon-Tweed downstream or a twenty mile trip by way of Coldstream upstream of here.

The next bridge upstream today is the Ladykirk and Norham Bridge, opened in 1888, and the next below the Union Bridge is the modern A1 Tweed Bridge.

The bridge was designed by a Royal Navy officer, Captain Samuel Brown. Brown joined the Navy in 1795, and seeing the need for an improvement on the hemp ropes used, which frequently failed with resulting loss to shipping, he employed blacksmiths to create experimental wrought iron chains.[1] HMS Penelope was fitted with iron rigging in 1806, and in a test voyage proved successful enough that in 1808, with his cousin Samuel Lenox, he set up a company that would become Brown Lenox & Co.[1] Brown left the Navy in 1812, and in 1813 he built a prototype suspension bridge of 105-foot span, using 296 stone of iron. It was sufficiently strong to support a carriage, and John Rennie and Thomas Telford reported favourably upon it.[2][3]

Brown took out a patent in 1816 for a method of manufacturing chains, followed by a patent titled Construction of a Bridge by the Formation and Uniting of its Component Parts in July 1817.[1][3][4] In around 1817, Brown proposed a bridge over the River Mersey at Runcorn with a thousand-foot span, but this bridge was not built.[3] It is not known why Brown became involved with the Union Bridge project, but agreed to take on the work based on a specification dated September 1818.[1]

The Dryburgh Abbey Bridge, a cable-stayed footbridge further upstream, had collapsed in January 1818, shortly before construction of the Union Bridge commenced.[1]

Brown knew little of masonry, and Rennie did this aspect of the work.[3]

The bridge proposal received consent in July 1819, with the authority of an Act of Parliament that had been passed in 1802, and construction began on 2 August 1819.[1]

It opened on 26 July the following year, with an opening ceremony attended by the celebrated civil engineer Robert Stevenson among others. Captain Brown tested the bridge in a curricle towing twelve carts, before a crowd of about 700 spectators crossed. Until 1885, tolls were charged for crossing the bridge. The toll cottage, at the Northumberland end, was demolished in 1955.

With the abolition of turnpike tolls in 1883, maintenance of the bridge passed to the Tweed Bridges Trust. When the Trust was wound up, the bridge became the responsibility of the two councils on either side and it is now maintained by Northumberland Council.[5]

In addition to the 1902 addition of cables, the bridge has been strengthened and refurbished on many occasions. The bridge deck was substantially renewed in 1871, and again in 1974, with the chains reinforced at intervals throughout its life.

The bridge was closed to motor vehicles for several months during 2007. A newspaper report indicates that the closure happened shortly before 12 April 2007 and was due to one of the bridge hangers breaking. The affected hanger has temporarily been replaced with threaded bar to allow the bridge to reopen to motor vehicles. 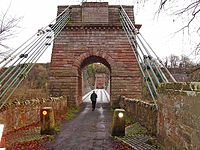 Pier at the Berwickshire end