Uley Bury is the long, flat-topped hill just outside Uley, Gloucestershire. The top of the hill is carved into an impressive multi-vallate, scarp-edge Iron Age hill fort dating from around 300 B.C.

Standing some 755 feet above sea level, the hill has views over the Severn Vale.

Uley Bury is a spur of the Cotswold escarpment, made up of thick beds of inferior oolitic limestone of the Jurassic period, overlying Bridport Sands. Part of the Bury is a Site of Special Scientific Interest famous for abundant fossils of Lower Jurassic age which occur here in the stratum known as the Cephalopod Bed. One particular horizon is especially noted for the ammonites it contains, which indicate that the strata are of early striatulum subzone age. Below in the Bridport Sand strata a thin, isolated sandstone layer contains what are elsewhere very rare ammonites, known as Haugia variabilis.

View along the north-eastern rampart of Uley Bury, drawn by E.J. Burrow in 1913

Uley Bury hill fort is a very large Iron Age settlement with evidence of occupation from approximately 300BC to 100AD. It covers 32 acres. It is one of a number of hillforts that can be seen along the Cotswold escarpment, other notable examples being Crickley Hill and Painswick Beacon.

The Bury is surrounded on all sides, apart from at the northern corner, by steep natural slopes. The hill fort was created by terracing a double line of ramparts – more than a mile in length overall - into the hillsides.

Excavations carried out on the north eastern rampart during the 1970s found evidence of how the ramparts were constructed. Finds during this excavation included a crouched burial, iron currency bars, quern stones, a brooch, and large amounts of pottery. Finds made at other times include a gold coin of the Dobunni tribe, and a silver Roman coin.

Aerial photography has revealed extensive crop marks suggesting that there were once numerous dwellings in the interior of the hill fort; however, these have not yet been excavated.

Uley Bury is a Scheduled Ancient Monument. Hetty Pegler's Tump, a notable Neolithic long barrow, and West Hill, the site of a Romano-British temple, are both nearby. 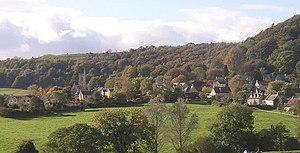 Uley Bury is on a long ridge at the western edge of the Cotswolds, steep on both east and west. The little village of Ulley nestles under its eastern slope.

The main access is from the Dursley to Stroud road (B4066) at Crawley Hill, just north of Uley. It can also be accessed from the Cotswold Way, and from several other local footpaths and bridleways.