Trelystan is a remote township of the ancient parish of Worthen in Montgomeryshire, adjacent to the border with Shropshire. Trelystan additionally forms part of the civil community of Forden, Leighton and Trelystan. St Mary’s Church is sited 900 feet up at the southern end of the Long Mountain to the east of Welshpool. Trelystan was a chapel of ease within the parish of Worthen and it also served the township of Leighton. In 1854 Leighton became a separate ecclesiastical parish and Trelystan followed in 1874. Trelystan, along with Leighton and Rhos Goch now form the ecclesiastical parish of Terlystan in the Diocese of Hereford and within the Archdeaconry of Ludlow.[1]

There is a strong possibility that Elystan Glodrydd, who died in AD 1010, was buried at Trelystan and the Welsh placename could derive from Cappell Tref Elistan. The tradition is first mentioned in the Harleian Manuscript 1973, written by Jacob Chaloner: Elistan Glodrith, or Edelstan the renouned, borne in the Castell of Hereford, anno 933, and in the 9 yeare of Edlistan, K of Saxons, who was his godfather, was Earle of Hereford, and Lord of the countrey above Offa dich, betwene Wy and Severne, in tyme of Edelred, K of Saxons. He dyed & was buried at Cappell Tref Elistan in Causeland (i.e. Trelystan in the hundred of Cawrse).[2]

In 1485, Long Mountain by Trelystan was the muster point of the Welsh army of Henry Tudor (King Henry VII) led by his famous military commander Sir Rhys ap Thomas. They marched from there to Bosworth Field, where they defeated King Richard III. Sir Rhys was a descendant of the Princes of Deheubarth, whose castle of Dinefwr he inherited from his father. Sir Rhys’ wife Eva was a direct descendant of Elystan via his grandson Idnerth ap Cadwgan ab Elystan.[3] 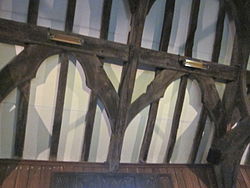 The church is unique in Montgomeryshire in that it is timber-built. Single-chamber, with south porch and west belfry; the original timber framed building is likely to be 15th or 16th century in date. It was restored in 1856 with an outer outer timber framed casing and brick nogging outside and matchboarding inside.[4] The church was restored again in September 2014 and this revealed that where the original timber-framing was intact, wooden panels were used to infill the framework, rather than the normal wattle and daub. Possibly at a later date lathes had been nailed to the framing, and this had then been torched, so that the outside of the church, before the 1856 restoration, would have presented a smooth rendered surface.[5] The church has simple 19th-century cusped timber windows. The 15th-century roof of principals and arched braces has two tiers of trefoiled wind-braces. Every other truss was strengthened with a tie-beam, now sawn off, and replaced with iron tie rods. The flagstone floor is inset with C17 and C18 memorial slabs at the East end. 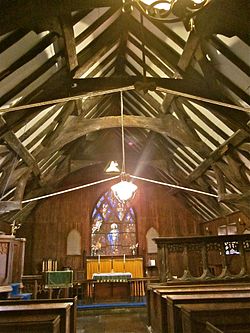 The square wooden bell turret has a slatted lower stage and a second stage consisting of two square-headed louvred apertures in each face. There is a pyramidal slate roof surmounted by a wrought iron weathervane. The truss at the west end defines the position of the former gallery, which was originally reached by a ladder stair set in the north-west corner. Four modern chamfered uprights support what is now the bell turret. Behind these the ceiling slopes downwards broken only by the window aperture above. The front of the bell turret, formerly the gallery, has close-set studs, plastered between, with a large thick beam for the top rail.[6]

Rood Screen of five lights survives, without cresting, but with five different ogee tracery heads robustly carved in oak. Crossley observed that the semicircular heads and boarding at the base are characteristic of the Dee valley screens and resemble the screen at Pennant Melangell.[7] The screen looks out of place in its present position and it has been suggested that it originally came from Chirbury Priory at the time of the Dissolution. The altar rails have turned balusters and date from c. 1700. The Barrel Organ was made by S. Parsons of London in 1827 and has a Gothic revival case. Old box pews are reused as wainscot. The stained glass in the east window of The Agony in the Garden, is perhaps by David Evans.

The churchyard is a small, almost rectangular enclosure which looks to have been extended to the north-east and perhaps to the south-west. Reached by a track across fields. Six yews of considerable age encircle the west side of the church; the largest being by the south porch. Close to this yew there is a tombstone to the three men who were killed during the construction of Leighton Church.[6]