Trehafod is a village in the Rhondda Valley of Glamorgan between Porth and Pontypridd. A former coal mining area, the village is now best known as the site of the Rhondda Heritage Park, the former Lewis Merthyr colliery, which is now a tourist attraction reflecting industrial life of coal mining Rhondda. 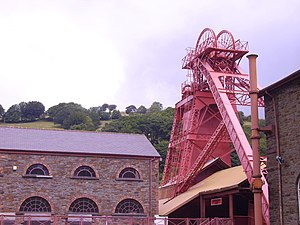 The 1847 tithe map of the area shows a number of farms on the area that was to become Trehafod, these were named, Hafod Uchaf, Hafod Ganol and Hafod Fawr. It was from these farms that Trehafod was to take its name. Hafod is a Welsh-language word that can mean "summer dwelling" or "upland farm".

Trehafod railway station lies on the Rhondda Line which follows the River Rhondda; the railway line and river border the village on either side.

Due to the river flowing very close to a lot of houses within the village there have been a number of floodings. The biggest floods were in 1960, which claimed the life of one man who lived in Afon street. Afon is a Welsh-language word that means river. In most streets, the whole lower level of buildings was submerged by water. Other years that floodings have occurred were 1921, 1929, 1979 and most recently in the mid 1990s. In the late 1990s the Trehafod stretch of the Rhondda river bank was reinforced, in an effort to prevent future floodings.