Thomastown, historically known as Grennan,[1] is a town in County Kilkenny. It is a lively market town along a stretch of the River Nore which is known for its salmon and trout, with a number of historical landmarks in the vicinity. Visitor attractions include Jerpoint Abbey, Kilfane Glen gardens, and Mount Juliet Golf Course.

The town is situated at a bridging point on the River Nore ten miles from the city of Kilkenny. It has a population of 2,273 (2011 Census) making the town the biggest in the county outside of Kilkenny. The R448 Naas–Waterford road passes through Thomastown, the town is serviced by buses and has a railway station. 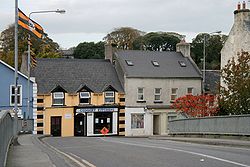 The bridge over the River Nore.

The town was founded in the 13th century on an important crossing point by an Anglo-Norman mercenary from Wales, Thomas FitzAnthony, replacing the earlier Irish settlement of Grennan, meaning 'Sunny Place'. FitzAnthony was granted a large area of land in the region by William Earl Marshall, son-in-law of Strongbow, and became the Seneschal (Governor) of Leinster in the 13th century.[2] He built fortifications at Thomastown, fragments of which can still be seen today, together with nearby Grennan Castle, now in ruins. FitzAnthony died in 1229. Of this castle and the town's walls, the only remains are the towers near each end of the bridge and the remains of a 13th-century church, dedicated to St Mary. The town became a small mediæval walled town.[3]

In 1650 the town was attacked by Oliver Cromwell. Grennan Castle was laid siege to by Cromwell's army and after two days the defending forces surrendered.[3]

Local tradition holds that the remains of Saint Nicholas, the 3rd century Anatolian bishop, lie in the vicinity of Thomastown in Jerpoint Park. A grave slab with the carved heads of three people at the ruined Church of St Nicholas, the church itself, and other stones are virtually all that remain of the mediæval village of Newtown Jerpoint, which had fallen into ruin by the 17th century. The village of Newtown was adjacent to Jerpoint Abbey, founded in 1183. The abbey had its own gardens, watermills, cemetery, granary, and kitchens, and was home to a group of Irish-Norman Crusaders in the Middle Ages. It was dissolved in 1540. The legend refers to a band of Irish-Norman knights from Jerpoint, who travelled to the Holy Land to take part in the Crusades. On their return to County Kilkenny, it is said they brought St Nicholas' remains.

Kilfane Glen is a restored historic 1790s garden of romantic era with waterfall, woodland walks and cottage orne. The garden is listed as an Irish Heritage garden. As an amenity it covers about 15 acres of easily accessible natural landscape.

The romantic landscape within the demesne of Kilfane House was developed during the 1790s by a particularly cultured and sensitive landowner and his wife, Sir John and Lady Power. Sir Richard Power, twin brother of Sir John also joined in the development of the garden.

The ruins of the 12th century Jerpoint Abbey is located near the town.

The nearby Grennan Castle, an oblong-shaped castle, dates from the 13th century and was erected by Thomas FitzAnthony. The castle was in good repair until the beginning of the 19th century, when parts of it were removed for building purposes.[3] 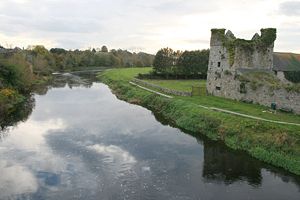 Milling, with mills powered by the waters of the River Nore, was the principal industry in the town until the early 1960s. The mills were Pilsworth's Mills. At one stage there were 12 water-powered mills, for grain and cloth, working in the parish. The last working mill in Thomastown closed in 1963. This mill is now the site of Grennan Craft School.[4] Several mill buildings in good condition can be seen upstream from the bridge.[3]

For centuries there was an important boat trade to carry produce to and from the port of New Ross. It went into decline at the end of the 18th century.

The R448 Naas–Waterford road passes through Thomastown where it crosses the R700 regional road. The R703 road connects the town with Ballymurphy, Co. Carlow.

The town is connected to the railway network on the Dublin-Waterford railway line via Kilkenny. Thomastown railway station opened on 12 May 1848.[5]

The town is a stop on the Waterford - Carlow - Dublin - Dublin Airport route. There are several daily services on this route. Thomastown is also served daily by the Bus Éireann Waterford - Athlone route 73 and on Thursday by the local Bus Éireann route, 365 to Waterford via Knocktopher. Kilbride Coaches' Kilkenny to New Ross route serves the town twice each way daily (except Sundays). Bus Éireann route 374 also operates from Kilkenny to New Ross but on Thursdays only.[6][7][8]

Dysart Castle close to Thomastown is reputed to have been the birthplace of the influential Irish philosopher Bishop George Berkeley. Thomastown was the birthplace of the Texas empresario James Hewetson.[9] Born in Kilmurry, Mildred Anne Butler (1858–1941) was an artist associated with the Newlyn School, she worked in watercolour and oil of landscape, genre and animal subjects. Butler spent most of her life at her family home in Kilmurry, Thomastown.[10] The house previously belonged to the Bushe family, whose most distinguished member was Charles Kendal Bushe, Lord Chief Justice of Ireland, who was born at Kilmurry in 1767.

British songwriter and guitarist John Martyn lived in Thomastown from 1998 until his death in 2009.[11]

Kayaking (canoeing) and fishing are very popular on the River Nore in the area, with the Thomastown Paddlers Canoe Club providing training on the river, which leads to the well-known village Inistioge.