The Frythe is a country house set in its own estate in rural Hertfordshire, just south of the village of Welwyn. It became a hotel before the War, and at the outbreak of war was turned into an industrial facility, which continued in peacetime until 2010. Since that time the estate has been transformed into a residential development, with the house at its centre.

The Frythe was part of the property of Holywell Priory, Shoreditch, and in 1523 William Wilshere obtained a sixty-year lease of the Frythe from the priory. As a result of the dissolution of the monasteries, in 1539 the property was granted to Sir John Gostwick and Joan his wife. Within ten years, Wilshere had purchased The Frythe from Gostwick's heirs, and the property remained in the possession of the Wilshere family for several centuries.[1] 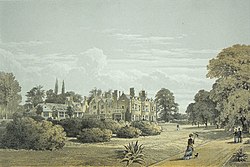 death in 1867 the house was enlarged by his brother Charles Willes Wilshere who inherited it. In 1908 The present "Gothic revival" mansion was built in 1846 for William Wilshere (MP for Great Yarmouth from 1837 to 1846). The architects were Thomas Smith and Edward Blore. After William Wilshere's son Charles Wilshere's death, it passed on to his three unmarried daughters until the last one died in 1934. The estate passed to a great-nephew, Captain Gerald Maunsell Gamul Farmer, of a landed gentry family of Nonsuch, Surrey, who adopted the surname of Wilshere,[2] and ran the house as "The Frythe Residential and Private Hotel".[3]

'The Frythe' was commandeered in August 1939 by the British Military Intelligence.[4] During the Second World War it became a secret Special Operations Executive factory known as Station IX making commando equipment. Secret research included military vehicles and equipment, explosives and technical sabotage, camouflage, biological and chemical warfare. In the grounds of The Frythe small cabins and barracks functioned as laboratories and workshops.[4]

The Frythe was for many years a commercial research facility, operated by Imperial Chemical Industries from 1946, by Unilever from 1963 and by Smith, Kline & French from 1977.[3]

From 1946 to 1963 the site was shared by ICI with Unilever.[3] New buildings were built by Unilever in the 1960s, with a contract for £400,000 in 1964 to Taylor Woodrow. Research was conducted on edible oils, margarine, ice cream, and frozen foods in the 1960s. Techniques included molecular biophysics, X-ray crystallography, nuclear magnetic resonance spectroscopy (NMR), mass spectrometry, ESR spectroscopy (electron paramagnetic resonance), and infrared spectroscopy.[3]

Cimetidine, discovered at The Frythe

The Frythe site was closed by GlaxoSmithKline and sold to a property development company on 19 December 2010.[6] The conversion of the property into flats is still underway.[7]