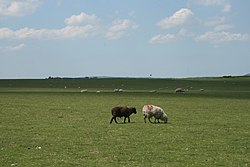 heep grazing on the Curragh plain

The Curragh (Irish: An Currach) is a flat open plain of almost five thousand acres of common land in County Kildare, between the towns of Newbridge and Kildare. Distinctive in its composition, the Curragh is composed of a sandy soil formed after an esker deposited a sand load and as a result it has excellent drainage characteristics. This had mades it a popular location for training racehorses.

This area is well known for Irish horse breeding and training. The Irish National Stud is located on the edge of Kildare town, beside the famous 'Japanese Gardens'. The Curragh Racecourse on the plain is Ireland's premier flat racecourse, and every year hosts all five classic races in the racing calendar.

A military training area is laid out on the Curragh also, and in past days it provided the main base for the British Army in Ireland.

Also located here is Pollardstown Fen, the largest fen in Ireland. This area is of particular interest to botanists and ecologists because of the numerous bird species that nest and visit there, and the many rare plants which grow in the fen.

Used as a meeting site during Pre-Christian societies, the Curragh is shrouded in a mist of mythology.

The hill north of the Curragh is called the Hill of Allen which legend tells was the meeting place of the mythical Fianna. Legend has it that in about 480 AD, when St Brigid became intent on founding a monastery in Kildare town, she asked the King of Leinster for the land on which to build it. When he granted her as much land as her cloak would cover, she then placed her cloak on the ground to cover the entire Curragh plain.[1]

History breaks upon this ground after the Anglo-Norman conquest. On 1 April 1234, Richard Marshal, 3rd Earl of Pembroke, lost a battle at the Curragh against a group of men loyal to King Henry III. Marshal was wounded in the battle, and died at his castle at Kilkenny on 16 April.[2]

The Curragh with warning signs

The Curragh was a common site for mustering the armies of the Pale.

During the 1798 Rebellion there was a massacre in the Curragh at Gibbet Rath. 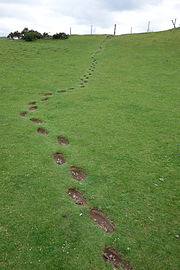 In 1815, in a natural bowl-shaped amphitheatre on the Curragh known locally as Donnelly's Hollow, the Irish champion boxer Dan Donnelly defeated the English champion George Cooper in 1815, before a large crowd. Donnelly had a famed reach and the remains of his arm were on show until recently in the Hideout Pub in the nearby town of Kilcullen.

The Curragh Camp was established on the plain in 1855 and was the island's largest camp for the British Army. Queen Victoria, Prince Albert and Edward Prince of Wales visited the camp. Today the camp remains, and the Irish Defence Forces undergo training here.

In 1866, a commission was appointed by the Treasury to report into the use made of the Curragh and make recommendations on legislation.[3] It reported in 1868,[3] and led to the Curragh of Kildare Act, 1868.[4]

In 1914, the name of the Curragh shook the government and nation, with the 'Curragh Mutiny' which occurred on 20 March 1914. After Parliament passed the Government of Ireland Act providing for Home Rule in Ireland, the Ulster Volunteers threatened to rebel to resist the imposition of Home Rule in Ulster. The Cabinet contemplated some kind of military action to suppress rebellion, and issued a letter to senior officers in preparation. In response though, many officers, especially those with Irish Protestant connections, threatened to resign their commissions rather than take action against the Ulstermen. The Cabinet backed down, and claimed it was a misunderstanding. The Curragh incident contributed both to unionist confidence, and also to the growing Irish separatist movement. Home Rule was in the event suspended at the outbreak of the First World War, and when reintroduced in allowed the separation of what became Northern Ireland. The event is one of the few incidents since the Civil War in which elements of the British military openly intervened in politics.

On 2 January 1941 the Curragh was bombed by the Luftwaffe, notwithstanding the neutrality of the Irish Free State, causing slight damage. (One SC250 bomb remains unaccounted for.[5])

The Curragh Racecourse on the plain is Ireland's premier flat racecourse. Every year, it hosts all five classic races in the racing calendar: the Irish Derby Stakes, the Irish Oaks, the Irish 1,000 Guineas, the Irish 2,000 Guineas and the St Leger.

On Thursday, 2 July 1903 the Gordon Bennett Cup ran through the Curragh. It was the first international motor race to be held in the United Kingdom, an honorific to Selwyn Edge who had won the 1902 event in Paris driving a Napier. The Automobile Club of Great Britain and Ireland wanted the race to be hosted in the United Kingdom, and their secretary, Claude Johnson, suggested Ireland as the venue because racing was illegal on public roads in Great Britain. The editor of the Dublin Motor News, Richard Mecredy, suggested an area in County Kildare, and letters were sent to 102 Irish MPs, 90 Irish peers, 300 newspapers, 34 chairmen of county and local councils, 34 County secretaries, 26 mayors, 41 railway companies, 460 hoteliers, plus the Bishop of Kildare and Leighlin, Patrick Foley, who pronounced himself in favour. Local laws had to be adjusted: the 'Light Locomotives (Ireland) Bill' was passed on 27 March 1903. Kildare and other local councils drew attention to their areas, while Queen’s County declared That every facility will be given and the roads placed at the disposal of motorists during the proposed race. Eventually Kildare was chosen, partly on the grounds that the straightness of the roads would be a safety benefit. As a compliment to Ireland the British team chose to race in Shamrock green, which thus became known as British racing green (although the winning Napier of 1902 had been painted Olive green).[6][7][8][9]

The route consisted of two loops that comprised a figure of eight: the first was a fifty-two mile loop that included Kilcullen, the Curragh, Kildare, Monasterevin, Stradbally, Athy, followed by a forty-mile loop through Castledermot, Carlow, and Athy again. The race started at the Ballyshannon cross-roads (53°5’7"N, 6°49’12"W) near Calverstown on what is now the N78 road heading north, then followed the roads now labelled the N9 north; the N7 west; the N80 south; the N78 north again; the N9 south; the N80 north; the N78 north again. Competitors were started at seven-minute intervals and had to follow bicycles through the 'control zones' in each town. The 328-mile race was won by the Belgian Camille Jenatzy, driving a Mercedes in German colours.

After the Second World War, both motor cars and motorcycle racing took place on occasions drawing crowds up to 30,000. For eight years from 1947 until 1954 cars competed, while motorcycle racing continued until 1967.[10][11] The first race was run by the Leinster Motor Club on 12 July 1947 over a 1.67-mile course known as the "Short circuit" but eight years later the death of Don Beauman during at a different Irish venue plus other fatal racing accidents in 1955 brought an end to motor car racing at the Curragh.[12] The 1951 Wakefield Trophy was won by the then 22-year-old Stirling Moss.[13]

On film and in popular culture