The Convent stands on Mian Street, Gibraltar and has been the official residence of the Governor of Gibraltar since 1728. The building here was originally a convent of Franciscan friars, hence its name, completed in 1531.[1]

The Convent is stands towards the southern end of Main Street. A guard mount takes place at the main entrance a few days a week conducted by soldiers of the Royal Gibraltar Regiment. The Changing of the Guard is also conducted outside the Convent a few times a year.

The dining room at the Convent is reckoned to have has the most extensive display of heraldry in the Commonwealth.[2]

The Convent from the Upper Town in 1879

Franciscan friars arrived in Gibraltar during the reign of King Charles I of Spain. They were granted a plot of land in the area known at the time as La Turba where the poorer people of Gibraltar lived. A church and a friary were built in 1531.[3] The entrance was at the back (what is now Governor's Lane). It stretched up to the area that is occupied today by the John Mackintosh Hall.[4]

After the capture of Gibraltar by an Anglo-Dutch fleet in the name of the Archduke Charles, the Franciscan friars did not follow the exodus of the Spanish population and remained in Gibraltar, at least for some years, as their presence was recorded in 1712.[5] The Franciscan friary was later taken over as the residence of the British governors in 1728 and has remained so ever since.

The building was heavily rebuilt during the 18th and 19th centuries in the Georgian style with later Victorian elements. 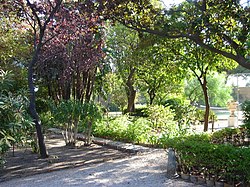 Among some of the trees in the Convent Gardens are those planted by King Edward VII, the German Emperor Wilhelm II, the Japanese Emperor Hirohito and Queen Elizabeth II.[6]

In 1903, King Edward VII arrived to open the new No. 3 Dock of Gibraltar Harbour (which was named "King Edward VII Dock" in his honour). When King Edward was set to visit Gibraltar again 1908, the press printed strident complaints that the King should be staying in a Roman Catholic nunnery, as some assumed it to be, and so the King issued instructions that the Convent be called 'Government House'.[7] When King George VI visited Gibraltar in 1943, during the War, he ordered that the historic name be restored.[1]

The Convent with King's Chapel on the right

The garrison church adjacent to the Convent, part of the original Franciscan complex,[8] was renamed Queen's Chapel during Queen Victoria's reign, but Queen Elizabeth II restored it to its original title. Inside the chapel, beneath the colours of several British regiments, lie the remains of the wife of the Spanish governor of 1648, together with those of the British governors Charles O'Hara and Sir Colin Campbell, who were laid to rest in 1802 and 1814, respectively.

The convent has, inevitably, attacted its own legends. One tells that it is haunted by the ghost of a nun, known as "Lady in Grey"[2][9] who is said to roam the corridor outside one of the guest rooms. It is said that she considers it to be her room, as she was walled up alive in it.[10]

There are various versions of the "Grey Lady" story,[11] the most popular being that she was the daughter of an affluent Spanish family who had married against her father's wishes. When he learnt of it, he placed her in the "Convent of Santa Clara" situated in the Main Street, where under the eyes of the Mother Superior, the girl was forced to take her vows and become a nun. Her lover was not discouraged; he joined the Franciscan Order and settled in the Convent. The couple are said to have met in the confessional of the King's Chapel where they hatched plans for their escape.[2]

On the night of their escape they made their way to the harbour where a boat was waiting for them. However, the alarm was raised and in the ensuing chase the lover fell into the water and drowned. The bride was arrested for breaking her vows and as punishment was walled up alive in one of the rooms in the Convent.[2]