Swanwick is a village in Derbyshire, a former mining village, with a population of 5,043 at the 2011 census.

The village has a goodly number of shops, pubs and other businesses, and a cluster of churches. In the northern part of the parish an industrial estate on the former Swanwick Colliery site incorporates the Thornton's Confectionery factory along with other businesses. Now largely urbanized, the parish still has some remaining agricultural land to the north and west.

The name 'Swanwick' is derived from the Old English "Swana" meaning herdsmen, and "wic" meaning a village.[1] It is thought to have begun in the vicinity of the farm above The Hayes, on which a number of ancient footpath routes converge. The village is first mentioned in 1304 in Sir Thomas Chaworth's grants to Beauchief Abbey. Sir Thomas was the Lord of the Manor of Alfreton, which encompassed Swanwick.

The area was exploited for coal from early times, first with small pits in the locality known as The Delves (meaning 'diggings') and later with a major colliery in the north of the parish. The Swanwick Colliery finally closed in the 1960s.

Several families figure highly in Swanwick's long history. The Turners, beginning with George Turner in 1620, owned the local mineral rights and became coal magnates, until the death of Charles Turner in 1736. John Turner built Swanwick Hall around 1690. Elizabeth Turner had a school built in 1740 to provide education for 20 children from poor families. The school house is now a private residence. The other most significant family was the Woods, who occupied the original Swanwick Hall ('The Old Hall') in what is known as Wood's Yard. It was a substantial yeoman's residence of 1678, as evidenced by a datestone high up on the dormer gables, along Derbyshire County Council having bought it two years earlier after the death of Hugo Wood.

Swanwick Hayes (now the Hayes Conference Centre) was built in the 1850s as the home of Mr Fitzherbert Wright. In the early 1900s, it was converted into a conference centre, and operates as such to this day. The Hayes gained some note during Second World War, when it served as a prisoner of war camp for both German and Italian prisoners. Franz von Werra, a Luftwaffe officer, escaped from here; he was recaptured at nearby RAF Hucknall, while trying to steal an aircraft. A film entitled The One That Got Away, starring Hardy Krüger, was made of his exploits. 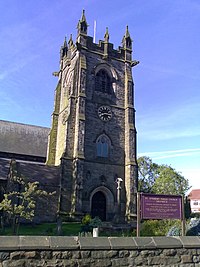 The parish church is St Andrew's, but after the Revd John Wood gave land for a church to be built in Swanwick in 1856. With the aid of a donation of £3,230 from Francis Wright the building was completed in 1859 with a nave of five bays, north and south aisles, north porch and bell turret over the west gable. The pointed arches on both sides of the nave and in the chancel imply that the architect, Benjamin Wilson, had Early English architecture in mind when he designed the building.

The churches of the village are:

The village has four schools: Swanwick Hall,[2] Swanwick Primary School, Swanwick Pre-School and Swanwick School & Sports College. Swanwick Hall was once a manor house of the village, converted into a school in 1922.

The Hayes Conference Centre stands to the south of the village. It was formerly Swanwick Hayes, the seat of the Wright family.