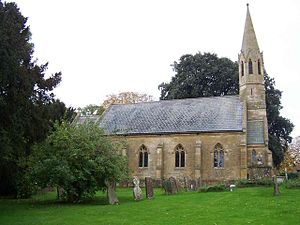 Stretton-on-Fosse is a small village and parish in Warwickshire adjacent to the border with Gloucestershire, on the fringe of the Cotswold Hills. The vilage has fewer than 200 houses, most built of Cotswold stone or locally made red brick. The population of the civil parish taken at the 2011 census was 439.[1] It is not to be confused with the other Warwickshire village of a similar name, Stretton-under-Fosse.

The name Stretton means "settlement on a Roman road" (from the Old English stræt and tun). In this case the road is Fosse Way.

Two manors are listed in the Domesday Book of 1086, of these only one remains adjoining the imposing Stretton House on the higher ground (400 ft) of the village. Whilst the lower ground of the village is heavy clay the upper parts are composed of sand and shingle. During commercial extraction of sand important graves of the Roman-British and Anglo-Saxon periods were uncovered and interesting skeletons and personal belongings were unearthed.

Until recently the village consisted of several farms, with housing for local residents occupied in cultivation of the land and the trade association of the rural economy, such as, shops, post-office, school, inns, blacksmith, and three religious buildings. However, of these only the church (rebuilt in 1841) and the Plough Inn remain, and are still used for their intended purpose. A new imposing village hall was built in 1990 to replace the post-war wooden hut. There was once a railway line and station, both now gone.

The largely deserted mediæval village of Ditchford Frary is also part of the civil parish; the church, which has become ruinous, was annexed to Stretton in 1641.

In 1826 the Stratford and Moreton Tramway, with horse-drawn trucks and carriages, was opened for carrying coal and passengers from Stratford-upon-Avon to Moreton-in-Marsh, and it passed through the village. At a later period a branch line was constructed to Shipston-on-Stour which was used for passengers until 1929 and goods until 1960.

This Warwickshire article is a stub: help to improve Wikishire by building it up.
Retrieved from "https://wikishire.co.uk/w/index.php?title=Stretton-on-Fosse&oldid=67971"
Categories: