Strathpeffer is a village and spa town in Cromartyshire; a little place, with a population of 1,469 at the 2001 census, but with the grand establishments of the age of the spa towns.

The village stands in a glen five miles west of Dingwall, with varying elevation from 200 to 400 feet above sea level. Sheltered on the west and north, it has a comparatively dry and warm climate. 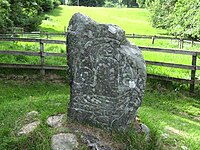 The strategic location of the village has led to several battles being fought in the area :

Blar Nan Ceann, ('Battle (field) of the heads'), lies at the western end of the modern village (NH47625773[1]). Very little is known about the battle there, not even its date, other than the MacKenzies of Seaforth defeated the MacDonells of Glengarry and some incident took place at a well near the battlefield, subsequently called Tobar a' Chinn (well of the head).

The Battle of Blar Na Pairce, battle (field) of the park, in approximately 1486 saw the local MacKenzies, under their chief Kenneth MacKenzie, defeat a large invading force of MacDonalds. The battlefield lies south-west of the modern village, on the banks of Loch Kinellan. The loch contains a crannog, which remained a hunting seat of the Earls of Ross until the late mediæval period and was reportedly visited by Robert The Bruce during his reign. It was from this crannog that Kenneth MacKenzie went out to meet the MacDonalds.

The Battle of Drumchatt took place in 1497 on Drumchatt (Druimchat) or "the Cat's Back", a ridge to the southeast of Strathpeffer. The Clan Mackenzie and Clan Munro defeated the invading Clan MacDonald of Lochalsh. 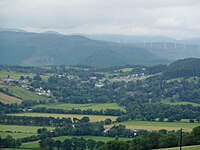 Strathpeffer from the north east

In the Victorian era Strathpeffer was popular as a spa resort, owing to the discovery of sulphurous springs in the 18th century. The pump-room in the middle of the village dates from 1819. Soon after that, a hospital and a hotel were also built. The Strathpeffer Pavilion dates from 1880, and was built to provide a venue for entertainment of the visitors. It fell into disuse and disrepair towards the end of last century, but has now been restored as a new venue for the arts, weddings, other functions, and events of all kinds.

Coal like material was found near Castle Leod in the 1700s and was worked for a short time. The material was evaluated by well known Mining Engineer John Geddes in the mid 1800s but it is not known if his suggestion that it should be further evaluated was implemented.

The arrival of the railways in Dingwall in 1862 did much to bring more visitors to the town. In 1885 a branch line from the Kyle of Lochalsh Line was built and Strathpeffer railway station was opened on 3 June; the most logical route for the line to Kyle of Lochalsh was through the town, but disagreements with landowners initially prevented the railway from crossing their land. The branch closed in 1946. The station now contains a variety of shops and craft outlets as well as the Highland Museum of Childhood. The nearest stations are now in Dingwall and Garve.

A project is under way by the Strathpeffer Spa Railway Association to restore some of the track, buy an engine and run a short heritage line.[2]

Strath Peffer, which gives a name to the village, is the broad valley of the River Peffery leading to the coast at Dingwall. It is not a great glen nor a lengthy dale but the meadowland beside the river running down to the sea, for the most part in Cromartyshire but at its lower end in Ross-shire.

The River Peffery rises in burns running off the slopes of Ben Wyvis to the north of Strathpeffer, and goes by the name of 'Allt Dearg' in its upper reaches. At the village of Strath Peffer it turns east and enters the broader 'strath'. The villages of Strath Peffer are Strathpeffer itself and the hamlets of Blairnininch and Fodderty, then across the county border is Dingwall, below which it enters the Cromarty Firth.

The detached part of Cromartyshire in which Strathpeffer stands is a larger one, reaching from the strath up the course of the Peffery / Allt Dearg (and the upper course of the Rogie Burn beside it) to Ben Wyvis.

Strathpeffer's distinctive Victorian architecture has added to its appeal. Strathpeffer contains several large hotels and many guest houses, holiday cottages and B&B establishments. There is a scenic golf course, which boasts the longest drop[3] from tee to green of any course in Britain.

Strathpeffer is the home of one of the world's most extreme mountain bike races, the "Strathpuffer", a 24-hour race held in January each year. Organised by Square Wheels bike shop, it uses the local trail network and regularly attracts over 400 competitors.

The Strathpeffer and District Pipe Band and local Highland dancers perform in the square every Saturday from end May to September, and this is a popular gathering for both visitors and residents. Nearby is Castle Leod, seat of the Earl of Cromartie, Chief of the Clan Mackenzie, which is now open to the public several times a year. The annual Strathpeffer Highland Gathering, one of the longest-established Highland Games in Scotland, takes place in the grounds of Castle Leod every August.

Strathpeffer is home to a vibrant music scene and has been described as "The Highland Village of Music". Strathpeffer Pavilion has hosted major acts such as Deacon Blue, The Kaiser Chiefs and Edwyn Collins. The Coffee Shop in Cromartie Buildings is a haven for songwriting and musical talent in the genres of folk, country and roots, regularly hosting acts such as Rory McLeod and Cara Luft. Strathpeffer and District Pipe Band perform regularly in the square.