The Stonehaven Tolbooth is the late 16th century town hall of Stonehaven, the county town of Kincardineshire, and once the centre of administration and justice for that shire.[1] It is a robust stone-built building and in its day it served as a courthouse and a prison.

Constructed of local Old Red Sandstone, the prison probably attained its greatest note, when three local Episcopalian clergymen were imprisoned for holding services for more than nine people (a limit established to discourage the Episcopalian religion in the mid-18th century).[2]

The Tolbooth stands midway along the old north quay of the Stonehaven Harbour. Today it serves as a local history museum with a restaurant on the floor above the ground floor. It is a Grade A listed building.[3] 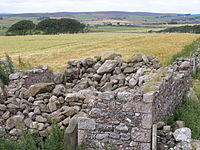 The Stonehaven Tolbooth is thought to have been founded by George Keith, 5th Earl Marischal (c. 1553–1623), with the original purpose of the rectangular building being as a storehouse. In 1600, an Act of Parliament provided that the administration of the county move from Kincardine to Stonehaven and that the building become a 'tolbooth' to accommodate it;[4] the text of that act reads: "The shiref of the shiref-dome of Kincardin in all time cum sall sit and hald their courtis at Stanehyve". After 1624, the town business functions were conducted on the upper level of the Stonehaven Tolbooth, with the ground floor being used as the prison.

By 1685, there are further accounts of the Stonehaven Tolbooth functioning as the seat of justice for all of Kincardineshire. Over the winter of 1748-1749, three Episcopalian clergy were incarcerated for the crime of holding a religious ceremony to more than nine people at the (now ruined) chapel situated on the estate grounds of nearby Muchalls Castle along the ancient Causey Mounth.[5] The Episcopalians were associated with the Jacobite cause and discriminated against by the ruling Hanoverians. The imprisoned clergymen's plight was memorialised in a well known painting, illustrating a baptism of an infant through the bars of the prison. The painting belongs to the Diocese at Brechin. 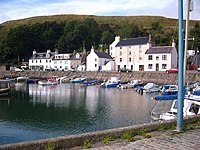 Stonehaven Harbour from near the Tolbooth

When new county government facilities were built in 1767, the Stonehaven tolbooth reverted to its earlier humble use as a storehouse.[6] In 1963, the Tolbooth was in need of restoration, Her Majesty Queen Elizabeth The Queen Mother officially opened it in September of 1963 with a local history museum on the ground floor and a restaurant on the above level. The museum displays objects relating to local history and the Tolbooth’s existence.

The original rectangular building was constructed with the long axis being east-west, with a length of 62 feet. The construction is of Old Red Sandstone, a locally derived stone that was used in other local buildings of the same period such as Muchalls Castle.[7] A 17th-century addition was added nearly at right angles to the original block, leading to a 17th-century design as an L-Plan, also in the manner of Muchalls Castle.

The gables of the original rectangular block are crow-stepped, with a chimney on the west end. An unusual design feature is that access to the first floor is achieved only via a stonework staircase at the west end of the original block. This design may have been derived from a desire to have town government business conducted without having to enter through the prison level. A paved courtyard lies embraced by the two L-Plan projections.

The north block (17th-century addition) floor retains original flagstones and cobblestones dating to the original north block. There is also a sizable firepit along the west wall of the north block wing, although the associated chimney above has been filled, rendering the fireplace unusable. At the ground level a partial stone wall partition separates the two large chambers belonging to the 16th and 17th centuries.

Arrow slits on the south facing 16th-century wall are original; however they have been filled in. The height of these slits suggest that the grade level of the building floor has likely been altered.

Inspection of the stonework indicates that there was an earlier opening at the centre of the east wall. The upper floor for the present restaurant use has been altered more extensively by interior partitions, although the basic window openings are thought to be original.