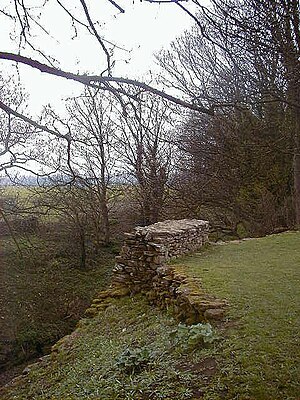 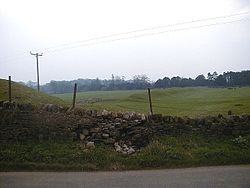 Stanwick Fortifications close to the main gate in the north west

Stanwick Iron Age Fortifications (also known as 'Stanwick Camp'), are the earthworks of a huge Iron Age hill fort in the North Riding of Yorkshire, surrounding the village of Stanwick St John. It is to be found at the northern edge of the county, between Richmond and Darlington (which sits across the River Tees in County Durham).

The fortifications have been termed an 'oppidum', though the applicability and indeed meaning of that term of art are not universally accepted. In either case, the works comprise over five and a half miles of ditches and ramparts enclosing approximately 700 acres of land,[1][2]

Stanwick is a substantial site by the standards of the time and is assumed to have been a royal stronghold of the Brigantes: perhaps the fortress of King Venutius or Queen Cartimandua, or perhaps of them both for a brief time before their acrimonious split after AD 51. It is certain that this settlement was one of the most important in the Brigantes kingdom during the early stages of the Roman occupation of Britain.

The name "Stanwick" appears to be derived from the Iron Age fortifications, and specifically the stone wall forming a major part of it: stanwic is Old English for "stone village".

The fortifications are to be found in the very north of Yorkshire, above the valley of the River Tees eight miles north of Richmond and ten miles south-west of Darlington (County Durham), close to Scotch Corner. Close by too are he remains of the Roman fort and bridge at Piercebridge. Rising to a height of almost 16 feet in places, the ramparts completely surround the village of Stanwick St John and form one of the largest Iron Age settlements in Britain, in extent if not necessarily in population. 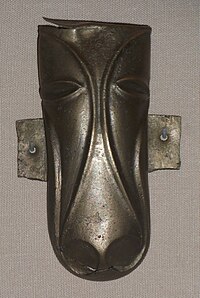 In 1845 a hoard of 140 metal artefacts known as the Stanwick Hoard which included four sets of horse harness for chariots and a bronze horse head 'bucket attachment', were found half a mile away at Melsonby.[3] These are now held by the British Museum, which also has the Meyrick Helmet, which may have been part of the hoard, or made at Stanwick.

Stanwick was the site of Sir Mortimer Wheeler's last major archaeological excavation in Britain, which he carried out over the summers of 1951 and 1952. Wheeler argued that the vast site had been constructed in three separate 'phases' starting from a modest 17-acre earthwork enclosure on a low hill known as 'The Tofts', dated to around AD40 (Phase I) then extended around AD50-60 with a new enclosure to the north of over 130 acres (Phase II), and then finally, around AD72, extended by a further 600 acres to the south (Phase III).

During the course of his excavations, Wheeler cleared a 50-foot section of ditch that the Brigantes had cut from the underlying limestone rock. He partially reconstructed a 10-foot length of dry-stone revetment wall from the fallen stones found in the ditch. This was constructed to an approximate height of two feet above the existing rampart, although Wheeler estimated that the original height of the wall above the rampart was probably closer to 15 feet.[4] Known as 'Wheeler's Wall', this entire section remains preserved by English Heritage and provides the visitor to Stanwick with a clear impression of how awe-inspiring the fortifications would have been in Iron Age times.

Amongst Wheeler's most famous finds at Stanwick were an Iron Age sword, unusually still in its well-preserved ash wood scabbard, and the nearby skull of a severed head, showing considerable damage from wounds inflicted by an axe or a sword. These were found in an excavation of a ditch terminal next to the location of the main north western gate and Wheeler believed they may have been hanging from the gate structure itself as a trophy or warning to enemies.[5] Wheeler concluded that Stanwick had been the rebel stronghold of Venutius, who had been the husband of the pro-Roman Brigantian queen Cartimandua, after he had split with her when she had taken his charioteer and armour-bearer Vellocatus as a lover and betrayed the rebel leader Caractacus to the Romans. Wheeler argued that Stanwick was the location where Venutius had rallied his anti-Roman tribesmen and allies for his revolt against the Roman invaders.

The next series of major archaeological excavations at Stanwick were carried out from 1981 to 1986 by a team from the University of Durham led by Percival Turnbull and Professor Colin Haselgrove. One of their most enigmatic finds was an adult male burial at the rear of a rampart in the fortifications where a horse's head had been carefully placed upon the body.[6] Turnbull and Haselgrove argued that Stanwick's huge outer circuit of ditches and banks had probably been built first, during the mid-first century AD, and then the inner area sub-divided. They maintained that the six mile fortification was too long to be easily defended and that its enormous size was intended instead to emphasise the power, prestige and wealth of its owner. They concluded that Stanwick had not been the fortress stronghold of Venutius but was rather the estate of his ex-wife, Queen Cartimandua, and possibly even the original tribal capital of the Brigantes.