St Mawes Castle and its larger sister castle, Pendennis, were built as part of a defensive chain of fortresses by King Henry VIII to protect the south coast of Great Britain. This chain of coastal fortifications are known as Henrician Castles or Device Forts. St Mawes Castle was built between 1540 and 1545, halfway down the hillside on the eastern shore of the River Fal estuary to provide protection to the large inland expanse of water known as the Carrick Roads, near Falmouth.

St Mawes Castle was built between 1540 and 1545 as part of Henry VIII's south coast fortifications.[1] Together with its sister castle at Pendennis, St Mawes defended the approaches to Carrick Roads, one of the largest natural harbours in the country.[2] It was built just above an earlier fortification dating to the late 1530s.[1] The building work was supervised by Thomas Treffry, who supervised the building of Pendennis Castle at about the same time.[3]

St Mawes was constructed with a central tower overlooking three huge circular bastions attached on the sides in a clover leaf pattern, providing a wide area for gun placements, with gun ports covering every angle of approach to the estuary. The clover-leaf plan was originally designed to mount "ship-sinking" guns.[1]

The castle was occupied by the Royalists in the Civil War, but it was not defensible from land attack, and it surrendered to Parliamentary forces in 1646.[1]

In the late 17th century a lead-covered dome (cupola) was added to the castle's stair turret as a navigational aid or daymark.[1]

At the end of the 18th century, a lower gun battery beneath St Mawes castle was built during the Napoleonic Wars – it was armed with twelve guns and built with three flanks.[4] In about 1870, the battery was armed by four 64 pounder guns, but the battery was remodelled in 1898 to house two 6 pounder quick-firing guns and a heavy machine gun.[4] These were served by a new underground magazine situated beneath the battery.[4] The lower battery was superseded by a more powerful battery built on higher ground by 1903.[4] During Second World War, the battery was part of an extensive system of defences set up on the headland.[4] 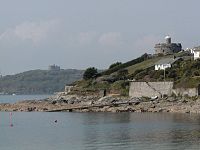