St Ives is a seaside and port town on the north coast of Cornwall. The town lies in the west of the county, north of Penzance. In former times it was commercially dependent on fishing. The decline in fishing, however, caused a shift in commercial emphasis and the town is now primarily a holiday resort.

St Ives has become renowned for its number of artists, and for nationally famous restaurants. It was named best seaside town of 2007 by the Guardian newspaper. For all this, it retains the feel of a pretty Cornish fishing village, if with more arty shops and restaurants then one might expect in such a village.

St Ives was incorporated as a borough by Royal Charter in 1639. 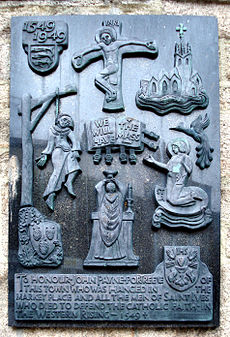 The origin of St Ives is attributed in legend to the arrival of the Irish Saint Ia (St Ia of Cornwall), in the 5th century. The parish church in St Ives still bears the name of this saint, and the name St Ives itself derives from it.[1]

From mediaeval times fishing was important at St Ives; it was the most important fishing port on the north coast. In the decade 1747-1756 the total number of pilchards dispatched from the four principal Cornish ports of Falmouth, Fowey, Penzance and St Ives averaged 30,000 hogsheads annually (making a total of 900 million fish). Much greater catches were achieved in 1790 and 1796. In 1847 the exports of pilchards from Cornwall amounted to 40,883 hogsheads or 122 million fish while the greatest number ever taken in one seine was 5,600 hogsheads at St Ives in 1868.[2]

Kenneth Hamilton Jenkin describes how the St Ives fisherman strictly observed Sunday as a day of rest. St Ives was a very busy fishing port and seining the usual method of fishing there. Seining was carried on by a set of three boats of different sizes, the largest two carrying seine nets of different sizes. The total number of crew was 17 or 18. However this came to an end in 1924. The bulk of the catch was exported to Italy: for example in 1830 6,400 hogsheads were sent to Mediterranean ports. From 1829-38 the yearly average for this trade was 9,000 hogsheads.[3]

After the railway came

Modern St Ives came with the railway in 1877. With it came a new generation of Victorian seaside holidaymakers. Much of the town was built during the latter part of the 19th century. The railway, which winds along the cliffs and bays, survived the Beeching axe and has become a tourist attraction itself.

Since the 1980s, St Ives has gained a reputation as a surfing spot, and flights have developed to the local airport. 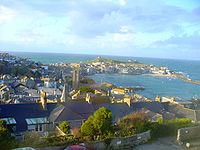 St Ives harbour and the sea beyond 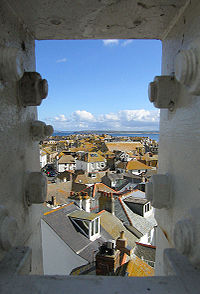 Cottage rooftops seen from the roof of Tate St Ives 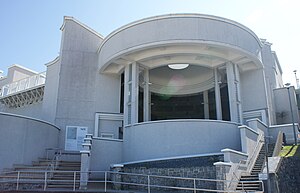 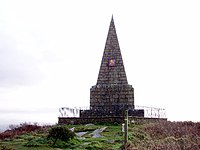 In 1928, the Cornish artist Alfred Wallis and his friends Ben Nicholson and Christopher Wood met at St Ives and laid the foundation for the artists' colony of today. In 1939, Ben Nicholson, Barbara Hepworth and Naum Gabo settled in St Ives, attracted by its quiet beauty. The "St Ives School" became a distinctive movement in art, attracting national and international attention.

Before the 1940s the majority of artists in St Ives and elsewhere in West Cornwall belonged to the St Ives Society of Artists; however events in the late 1940s led to a growing dispute between the abstract and figurative artists within the group. In 1948 the abstract faction broke away from the St Ives Society, forming the "Penwith Society of Artists" led by Barbara Hepworth and Ben Nicholson. The town also attracted artists from overseas, such as Piet Mondrian, who let the landscape influence their work, and Maurice Sumray, who became a successful and respected contributor to the St Ives art scene when he moved to the town from London in 1968.[4]

In 1993, a branch of the Tate Gallery, "Tate St Ives", opened here. Tate also looks after the Barbara Hepworth Museum and her sculpture garden. It was the wish of the late sculptor to leave her work on public display in perpetuity.

St Ives is home to three celebrations of interest.

The Knill Ceremony take place every five years on 25 July (St James's Day) in accordance with the instructions of John Knill, a Mayor of St Ives who founded the ceremony in 1797. (Knill also constructed the Knill Steeple, a granite monument overlooking the town.) The ceremony involves the Mayor of St Ives, a customs officer, and a vicar, who should be accompanied by two widows and ten girls who should be the "daughters of fishermen, tinners, or seamen".

The St Ives Feast is perhaps of greater antiquity, a celebration of the founding of St Ives by St Ia. It takes place on the Sunday and Monday nearest to 3 February each year. It includes a civic procession to Venton Ia, the well of St Ia, and other associated activities. It is most notable as one of the two surviving examples of Cornish Hurling (in a gentler format than its other manifestation at St Columb Major).

St Ives May Day is a modern revival of West Cornwall May Day customs that were at one time common throughout the west of Cornwall.

The St Ives September Festival began in 1978 and has since become famous. The Festival is one of the longest running and widest ranging Festivals of the Arts in the United Kingdom. It lasts 15 days and includes a range of arts from Music (including Folk, Jazz, Rock, Classical & World) to Poetry, Film, Talks and Books. It was founded in 1978 as a joint venture by a group of local entrepreneurs and the nearby International Musicians Seminar. The first Festival featured Folk and Jazz music Poetry, Film, Talks and Chamber Music. Many of the local artists in the town open up their private studios to allow visitors to see exactly how their art is produced. There is free music in many pubs in the town almost every night, as well as well-attended concerts. The Festival attracts thousands of visitors from all over the world.[5]

St Ives has a 500-seat theatre which hosts some of the September Festival events.[6]

The name of St Ives is known across the English-speaking world from the nursery rhyme and riddle "As I was going to St Ives", though the provenance of the rhyme is hotly disputed with St Ives in Huntingdonshire, which claims it on the basis of its ancient fair and markets. (A soap company in the Cornish town has named itself "Seven Wives of St Ives", as has a pub in the Huntingdonshire town.)

St Ives also figures in Virginia Woolf's reflections contained in "Sketch of the Past", from Moments of Being:[7]

...I could fill pages remembering one thing after another. All together made the summer at St Ives the best beginning to life imaginable.