St Helens is a village which is to be found on the eastern side of the Isle of Wight in Hampshire. The village developed around its village greens, which local people claim to be the largest in Britain, or more modestly the second-largest, though others may dispute it.

The village also has two restaurants, Ganders on the upper side of the green and Dan's Kitchen on the south. The local pub is The Vine.[1]

The village is a short distance from the coast, about a ten-minute walk to St Helens Duver. The Duver was once the location of the island's first golf course (and one the first golf courses outside Scotland), which for a while was almost as famous as the golf course at St Andrews. It is now a popular beach for tourists during the summer season and is protected by the National Trust.

The origin of St Helens seems to revolve around the Cluniac Priory and the monastic church, built circa 1080.

In 1340 a French raid landed at St Helens but was repulsed by Sir Theobald Russell. In 1346 Edward III set sail from St Helens to invade Normandy.

After Henry V suppressed the alien priories in 1414, the old church became the parish church. The original church eventually became unsafe and a new one was built further inland. In 1720 a great wave destroyed the old church, though the church tower still stands to this day; the seaward side is painted as a sea mark. It is believed locally that Admiral Lord Nelson's last view of Britain was of the St Helens seamark as HMS Victory had anchored nearby to collect drinking water, before setting sail for Cadiz, where Nelson would lead the fleet into the Battle of Trafalgar.

In the early 18th Century, the entrance to the harbour was near to the church. Attempts at reclamation of the harbour, which were unsuccessful due to locals removing building materials, resulted in the harbour being moved. The church was undermined by the quarrying of stone from the beach, which accounts for the large dressed blocks leading along the beach to Priory Bay. A small gun battery, which has been lost to the sea, once defended the entrance.

Dressed stones from the walls of the destroyed church, which were soft sandstone, were found to be good for scrubbing the decks of wooden planked warships - hence the terms 'holystone' and 'holystoning the decks'.

St Helens is home to a number of families who have been residents for over 300 years. Common St Helens names include Attrill, Bennett, Burden, Dyer, Henley, Jacobs, Phillips, Toogood and Wade. 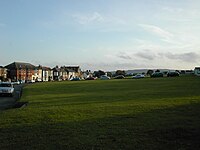 The village from the green

St Helens is located to the east of the Isle of Wight on high ground to the north of Bembridge giving it views over the busy harbour. The nearest town is Ryde, about three miles away to the north. The mainland of the county is distantly visible across Spithead, looking to Portsmouth and Hayling Island.

The village is on the coast, with St Helens Duver nearby at the mouth of the harbour. The area features a sand-dune complex where the first golf course on the island was located, and where there is now a popular sheltered beach, cafe and beach huts. The Duver is no longer a golf course and is maintained by the National Trust, who also offer limited self-catering accommodation for holiday-makers in the area.

A promenade stretches along the beach, with the sand dunes at the rear. During the summer season the beach is litter picked, with large amounts of seaweed removed and given to local farmers for composting.

The Eastern Yar, from its source at Niton to the south of the island, runs through the village on its course to the Solent.[2] 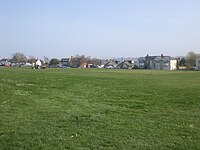 St Helens' built environment is set around large village greens, which are often claimed to make up the second largest green in England. The greens are split up in some areas to allow for roads, with housing and other development to the north and south sides of the greens.

The seafront at St Helens, with the old church tower in the distance

The parish church is named St Helen's, and it stands just outside the main village. The church was first built in 1717 but then rebuilt in 1831.

The present church is a stone structure with brick dressings, and consists of an aisleless nave, with transepts, a chancel and west tower with one bell.

The village has two restaurants. The Ganders is set on the upper side of the village green, and Dan's Kitchen is on the south side. The village's pub is the Vine Inn; situated opposite the village green, it is over 100 years old.[3] Until the late 1960s it was adjoined by a rival pub, the Sailor's Home.

The village has a primary school (St Helen's Primary School). For much of 2008 it looked likely that the school would be closed following education reforms to move the island to a two-tier education system. The village protested with signs displayed across the village stating "We love St Helens Primary School". In March 2009 the school was saved from closure.[4]

The village also has a newsagent, post office and grocery store, bookshop and garage. The Baywatch Café is located on the seafront and the Priory Bay Hotel close by.

The greens are often used for cricket matches during the summer and football in the winter, and also include a children's playground.[5]