Southgate is one of the 13 residential neighbourhoods in Crawley, a town in Sussex. Crawley was planned and laid out as a New Town after the Second World War, based on the principle of self-contained neighbourhoods surrounding a town centre of civic and commercial buildings. Southgate was one of the four in the "inner ring" closest to the town centre, and was intended to be the largest of the nine designed in the original master plan.[1]

Southgate was built in two stages between the 1950s and the 1970s, but retains some older buildings from before the New Town era and has "significant areas of pre-New Town character".[2]

Southgate is south of the Northgate neighbourhood (which includes Crawley town centre) and West Green, divided by the Arun Valley railway line. Gossops Green lies to the west, Broadfield is to the southwest, Tilgate is to the south and Furnace Green shares a small border to the east.

The A2219 Brighton Road, part of the original turnpike, coaching route and later main road from London to Brighton, runs through the heart of Southgate from north to south. The neighbourhood is roughly pentagonal and covers 447 acres.

When the New Town was planned, each neighbourhood was allocated a colour, which appears on street name signs together with the neighbourhood's name. Southgate's colour is dark brown. 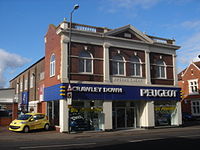 Apart from farms and their cottages, there was little else in the area now known as Southgate before Crawley was designated as a New Town in January 1947. The Crawley Development Corporation started building the neighbourhood in the 1950s. Some shops, a corn merchant's premises and a brewery were built near the level crossing in the late 19th century.[3] Crawley's first permanent cinema, the Imperial, was established nearby in 1911, replacing a temporary structure;[4] it burnt down in 1928 but was rebuilt, only to be superseded by a larger building in the town centre in the 1930s.[5][6] It has been a car dealership since the 1940s.[7] Further down the Brighton Road, near the Hogs Hill Farm where Iron Age remains were later found, the Half Moon Inn and Hotel was built in the late 19th century, and rebuilt in 1890.[8]

To the west, Goffs Park was established as a parkland and recreational area by the early 20th century.[1] It covers more than 50 acres, and its recreational features now include play areas for children, playing fields, sports pitches, lakes, a golf course and a miniature railway.

In the early 21st century, commercial development spread along Southgate Avenue south of the railway line: a series of seven-storey office blocks were built.[9] The Arora International Hotel Gatwick/Crawley also stands nearby.

Southgate has two of listed building:

Crawley Borough Council has designated a Conservation Area around the level crossing on Brighton Road. Part of this falls within Southgate's boundaries. Elsewhere, Goffs Park Road has been given the status of an "Area of Special Environmental Quality". Goffs Park itself was given a Green Flag Award in July 2008 in recognition of its high standards.

Crawley Museum is based in Goffs Park House in Goffs Park, although in March 2010 plans were announced to move it elsewhere in the town.