South Moreton is a village in Berkshire about three miles east of Didcot.

South Moreton has a church, a chapel, a school and a public house, but not a shop nor village hall. There are a few large old houses on the High Street, some newer houses at the east of the village, modern social housing to the west, and some cottages in between, many thatched.

The Crown public house, on High Street, was the last to be rebuilt by Wadworth of Devizes before the enactment of statutory limits on breweries owning public houses. 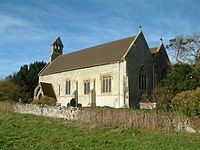 The parish church bears the dedication to "Saint John the Baptist at Bethabara" and is now a member of a team ministry that includes six local parishes. Its oldest structure is a doorway which is possibly Anglo-Saxon doorway. It stands by some ancient earthworks by a ford at the outskirts of the village. The church's present appearance dates from the drastic restoration of 1849, when the roof was raised, and the font, pulpit, vestry and pews were installed.

The identitfication of the manor of Moretune in the Domesday Book is ambiguous but four of the five manor houses are identifiable: Saunderville, still known as 'The Manor', a moated manor house with horses grazing in the railed paddocks, seen from the encroaching railway; Huse or Bray, a recently renovated low building nearby, again with a paddock in front of it; Adresham of which the only trace now is the grassy terrace upon which it once stood; Fulscot, half a mile west of the village which still has a self-contained manor farm community. The largest house in South Moreton is none of these, but The Hall, very close to the Huse and the Manor.

Much Victorian history of the village is recorded in The Rector's Book, handwritten around 1905 from memories stretching back to 1845. When the Great Western Railway was being built, many of the cottages provided for the navvies as inns. Blotting paper was invented in South Moreton, in a mill commemorated by Paper Mill Lane.

In 2003 there was a vigorous campaign against the further expansion of Didcot in the direction of North and South Moreton, and as a result housing sites were approved in the opposite direction. There is however, a fear that within fifty years South Moreton will become a suburb of Didcot.

As for the next few years, the parish council has ideas to improve social facilities including the playground and perhaps a village hall, since the former Women's Institute Barn has reverted to private use only.