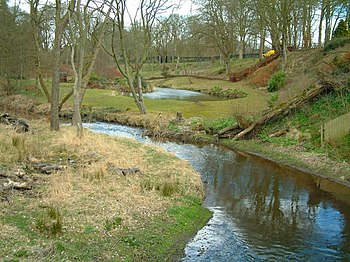 The South Calder at Bonkle 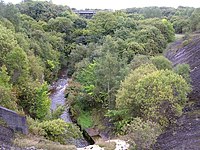 The South Calder at Ravenscraig

The South Calder Water is a river of Lanarkshire and a tributary of that county's great stream, the River Clyde.

The South Calder runs west from the high plateau between Shotts and Fauldhouse, which also produces the River Almond, which flows east into the River Forth.

The river is known locally as "The Cawder". It is one of several British rivers named the "Calder", including another Lanarkshire river, the North Calder Water a little to the north, which is also a tributary of the Clyde.

The South Calder Water follows a short course of approximately 10 miles, during which it winds round Shotts, Wishaw and Motherwell before flowing into the River Clyde.

Between its source and Newmains it follows a wide glacial valley and passes the village of Bonkle and Murdostoun, but after Newmains until its end at Motherwell, it cuts through a very deep and meandering valley. This valley was filled in at Ravenscraig during the construction of Ravenscraig steelworks to provide a large flat area. The river is therefore placed in a "cut and cover" tunnel as it passes for approximately ½ mile underneath the site, before reappearing at Jerviston. Driving across the now derelict Ravenscraig site gives no clues as to the underground river flowing below.

The river ends at Strathclyde Loch, where it used to join directly with the River Clyde. The River Clyde was diverted about 1 mile west of this point in the 1960s to create the large man made loch, which is now fed purely by water from the South Calder Water.