Snibston is a former coal mining village in north-western Leicestershire at the edge of Coalville, a town it helped to create. Just to the west standing apart is Ravenstone, with which Snibston shares a civil parish ('Ravenstone with Snibston').

The 13th-century church of St Mary in Snibston is the smallest church still in use for regular worship in England.[1]

The area is now dominated by the Snibston Discovery Museum, built on the site of the former colliery and consisting of an award-winning interactive museum, scheduled ancient colliery buildings, the Century Theatre, and a 100-acre country park and nature reserve. It is located within the area designated for the National Forest.

Snibston and Snibston Discovery Museum are managed by the council and supported by Next, and The National Forest Company.

John Marius Wilson's Imperial Gazetteer of England and Wales (1872) described Snibston as a:

'hamlet in Packington parish, Leicester; near the Swannington railway, 4½ miles SE of Ashby-de-la-Zouch. Pop., 595. Houses, 110. The manor belongs to Lady Edith Hastings. Coal is extensively worked. There is a very old chapel of ease.'[2]

Snibston Colliery was one of three coal mines sunk in the 1820s and 1830s that helped create the town of Coalville in north-west Leicestershire. Snibston Colliery was created by the famous engineers George and Robert Stephenson and produced coal continuously from 1833 to 1983. When it finally closed in 1985, the site was bought by the council with the aim of preserving the most important buildings, turning the rest of the derelict site into a recreational area and building a major new museum of science and working life. The Discovery Park opened in 1992.

Snibston Colliery's railway is one of the earliest ever built in Britain. It was constructed by Robert Stephenson between 1833 and 1836 to connect the colliery with the Leicester and Swannington Railway, built by his father George Stephenson on the east side of Coalville.[3] This railway was created to carry coal, not passengers. After Snibston Colliery closed in 1983 the railway line was partially dismantled and abandoned. However the section of line from the mine to the centre of Coalville was restored between 1998 and 2001.

Many of the historic mining buildings are now very rare survivals of this once-widespread industry and have been designated as scheduled ancient monuments.

The Museum features interactive exhibits, colliery tour, a train, a fashion gallery and more. The museum focuses on technology and design and how it affects everyday life.

The Museum is now accredited by Arts Council England and is Heritage Lottery Funded.

In January 2015 however the council announced that the museum would be closed and the land sold for housing.[4] 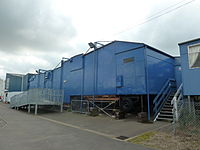 The 'Blue Box' of the original trailer-mounted Century Theatre 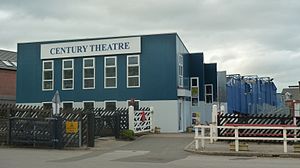 The new facade of the Century Theatre

The Century Theatre or 'the Blue Box' is a portable theatre, built on a series of ex-RAF trailers in 1952. The theatre was designed by John Ridley who used ingenious design; an aluminium superstructure and hydraulic rams, to create a professional quality theatre building that could be folded up and moved by road.

Following its opening night in Hinckley in September 1952, the theatre toured Britain until 1974, remaining only a few weeks in each venue. From 1974 until 1997 the Century was used as the town theatre of Keswick in Cumberland, and then, thanks to support from the lottery funding, it was saved from the scrapyard, refurbished and brought home to Leicestershire.

The theatre was run by its own company expressly created to take quality drama to communities throughout Britain and helped greatly with post-war cultural reconstruction. Many of the company’s actors and technicians went on from touring with the Century to make important contributions to theatre in Britain and abroad.