The Snaefell Mountain Railway is an electric mountain railway on the Isle of Man. It joins the village of Laxey with the summit of Snaefell, at 2,036 feet above sea level; the highest point on the island. In Laxey it connects with the Manx Electric Railway.

The line is over five miles long and built to 3-foot 6-inch gauge and uses a Fell Incline Railway System, a system with a raised centre rail between the two running rails to provide extra traction for braking on the steep gradients. The line is electrified using overhead wires at 550 volts direct current, with bow collectors. 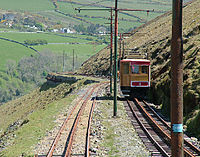 Car No.4 on the track

The railway operates from March to early November[1], taking 30 minutes for a one-way journey. In winter the overhead wires on the exposed upper part of the route are dismantled to avoid damage from icing. All passenger traffic is carried in five wooden-bodied electric railcars, built in 1895 and numbered 1, 2, 4, 5 and 6. Car 3 was destroyed in 2016. Car 5 was burned out in an accident in 1970 and its body is a replacement built in 1971 to a similar design. The cars were re-equipped in the late 1970s with new bogies to a design based on the original, using motors and traction equipment from withdrawn Aachen trams. Because of the different gauge and the centre rail, vehicles cannot inter-run between the railway and the 3 ft gauge Manx Electric Railway. Railway vehicles are occasionally worked to the MER workshops at Douglas by swapping their bogies, and to aid this there is a dual gauge siding in Laxey.

The railway is nationalised, owned and operated by Isle of Man Heritage Railways, a department of the Isle of Man Government. 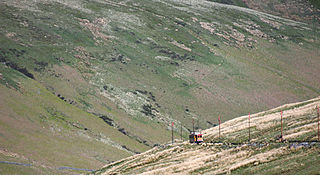 The line was originally surveyed by George Noble Fell, the son of John Barraclough Fell who invented the Fell system. This survey was for a steam-operated railway using the Fell centre rail for both propulsion and braking, and the scheme was approved by Tynwald in 1888 but not built. In 1895 the Snaefell Mountain Railway Association revived the plans, and adopted the route of the earlier survey. As the line was built entirely on land leased by the association there was no need for statutory powers, and the line was constructed very quickly and opened on 20 August 1895 (during construction the line was laid as a mixed gauge route of both 3' and 3'6"; the line was built using the six coupled Manx Northern Railway 4/IMR15 Caledonia; the 3' third rail was temporarily reinstated for the centenary to allow Caledonia, now fitted with a hydraulic Fell brake, to return to the mountain propelling an MER saloon coach. The line was built from scratch as an electric railway without Fell traction equipment, relying on normal rail adhesion for propulsion up the steep gradients; however the cars are fitted with Fell braking equipment for use when descending. In December 1895, the Association sold the line to the Isle of Man Tramways & Electric Power Co. Ltd (IoMT&EP), which owned the MER. Doubt was thrown on this transaction retrospectively after the later collapse of the IoMT&EP, when it was revealed that the SMRA was unregistered, and that most of the directors of the IoMT&EP were also members of the SMRA and had voted on the acquisition in contravention of that company's articles of association. The IoMT&EP went into liquidation in 1900 as a consequence of a banking collapse. The railway and the MER were sold by the liquidator to the newly-formed Manx Electric Railway Co. Ltd, which took over in 1902. By the late 1950s the company was in financial difficulties as well, and it was acquired by the Isle of Man Government in 1957.

The main railway station on the line is the interchange with the Manx Electric Railway at Laxey; the only intermediate stopping place on the line is at the Bungalow, at the mid-way position where the line crosses the Mountain Road (A18), part of the Snaefell Mountain Course used in the TT races. During race periods, trams terminate on either side of the road and passengers cross over a footbridge.

Above Laxey station there is a spur leading to the depot where all the rolling stock is housed and maintained; this complex was completely rebuilt in the winter of 1994-95 and officially opened in readiness for the railway's centenary. Also in the depot is a smaller shed which houses the Air Ministry railcars used to access masts at the summit during the winter months, when the overhead lines are removed from the top section of the line to prevent frost damage.

Car No.2 at Laxey Station

The railway operates with five of the original six identical tramcars, all built in 1895 by George F. Milnes & Co., and delivered in time for the line's opening that year. Of note is Car No. 5 which was severely damaged by a fire on 16 August 1970 and subsequently rebuilt locally, re-entering service in 1971. It was distinguished by having modern aluminium-framed "bus" type windows, but these were removed and wooden sliding ones refitted during a subsequent rebuild in 2003, when the tram became the first to carry the railway's name in Manx along its side. The current livery has been standard for over a century, save for a period upon nationalisation in 1957 when certain cars carried an unpopular green and white scheme. The original livery used until 1899 was a cream and Prussian blue scheme featuring "tramway" wording (rather than "railway" which has since been favoured). With the extensive rebuild of Car No. 1 commencing in 2011, this car was chosen to revert to the original colour scheme, complete with original wording: the first time a markedly different livery has been carried by any of the cars since the abolition of the short-lived nationalisation (green and white) colour scheme in 1962. Until the addition of rheostatic braking equipment on car roofs in 1970 knifeboard adverts were carried on the roof tops. Car No. 3 was totally destroyed in an incident on 30 March 2016, when it ran away from Summit station and subsequently derailed. The salvageable remains of the vehicle have been stored at the engineering works of the Manx Electric Railway, where it is expected that the car will eventually be rebuilt.[2]

The seventh car built by the railway was a non-passenger car supplied at opening in 1895. It was based largely upon the passenger cars, but without seated closed accommodation. Numbered 7 in sequence with the other stock and nicknamed "Maria", it was used to convey coal from Laxey to the power station near the Bungalow, and traditionally borrowed traction bogies from other passenger vehicles as required. It latterly saw many years at the works depôt mounted on barrels until it became completely rotten and beyond saving. A replica was built in 1994 to take part in the [[International Railway Festival celebrating the line's centenary. This saw limited use on the line; later it was converted for use on the Manx Electric Railway and re-gauged to 3-foot gauge. It is now re-numbered as Car No. 34 on the "low road" (a colloquial name for the MER to differentiate it from the mountain line). It features a mounted diesel generator for self-propulsion when the overhead wires are down.

There have been four different railcars on the line, all of which are Wickham trolleys, starting with Air Ministry No. 1 arriving Air Force Blue livery, being repainted into yellow and black (Civil Aviation Authority colours) in the 1960s; it has since been sold to a private owner and shipped to the UK in June 2007 for restoration. The second car arrived in Air Force Blue livery, again repainted into yellow and black in the 1960s. No. 4 is currently in use by National Air Traffic Services (the successor of the Air Ministry and Civil Aviation Authority). The vehicles were used to maintain the aerial masts at the top of Snaefell mountain.

The railway also has a four-wheeled wagon used to carry supplies to the summit railway station, which has no road access; the wagon is ordinarily propelled in front of the first morning car which delivers the staff to the summit, and remains at the summit during the operational day, returning behind the last tram. It is occasionally used on service cars as part of special events, primarily for photographic purposes.