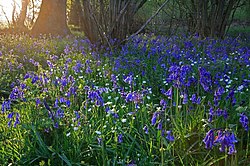 Sixpenny Handley or Handley is a village and parish in Sixpenny Handley Hundred in north-east Dorset. It is situated on Cranborne Chase, ten miles north-east of Blandford Forum. In the 2011 census the parish had a population of 1,233.

The village name is derived from two mediæval hundreds: "Sexpena" and "Hanlega", which by the 14th century were united as the hundred of "Sexpenne et Henle".[2] The village was originally known as Handley,[2] or Handley St Mary.[3] The use of the name Sixpenny Handley to describe the village and parish is fairly modern,[2] and was being used as an alternative name by the middle of the 19th century.[3]

On Woodcutts Common in the north of the parish (west-north-west of the village) is the site of a four-acre Iron Age and Romano-British settlement, probably a farm. It was excavated by General Pitt Rivers in 1884–5.[4]

The Great Fire of Handley 1892

On 20 May 1892, the village suffered a major fire which resulted in most of it having to be rebuilt, after nearly two hundred people were left homeless. Well-wishers subsequently sent gifts to aid the villagers; so much clothing was donated that it was said a man could be identified as being from Handley because he wore two or even three waistcoats.[5] This generosity was celebrated in 2014 by the Heritage Lottery–supported Sixpenny Handley Waistcoat Festival.[6][7]

Sixpenny Handley village is sited between 250 and 300 ft above sea-level in a shallow valley on the dip slope of the chalk uplands of Cranborne Chase. It is approximately ten miles north-east of Blandford Forum and 12 miles south-west of Salisbury in Wiltshire. The parish covers three valleys—the village being in the easternmost—which all drain south. The highest land in the parish, at over 500 ft[8] above sea-level, is in the north, where in places the chalk is overlain by deposits of clay with flint. The lowest land, at 200 ft, is in the south.[4]

Cranborne Chase is a designated Area of Outstanding Natural Beauty.[9] Other protected areas nearby include Garston Wood, a hazel coppice and RSPB reserve,.[10] and Martin Down, an area of chalk downland and a National Nature Reserve.[11]

Business units are provided at Town Farm Workshops and also at Manor Farm just outside the village. The village has a number of shops including a gift shop, hairdressers, butchers, post office and a small independent supermarket. There is a workshop garage which has no fuel pumps. There is a restaurant, two cafés, a pub and brewery.

Sixpenny Handley is located on the B3081 road which has been described as providing "a magical driving experience",[12] and the village is a popular stop-over for touring. Cranborne Chase hosts a number of festivals including The Great Dorset Steam Fair, Larmer Tree Festival and the Cranborne Chase AONB Woodfair;[13] the village is always busy at these times. The village’s isolated position makes it popular with both walkers and star gazers.

The parish church of St Mary dates from the 14th century. It has been designated a Grade-II* listed building.[14] St Marys is a Church of England Church. It is in the parish of St Mary's, Sixpenny Handley, Gussage St Andrew and St Rumbold's, Pentridge.[15] The Church yard is managed according to the Living Churchyards project.[16][17]

There is a play park for toddlers in Keats Meadow.

The village has two allotment sites; both are managed by the village’s allotment committee.

Handley has a doctor's surgery,[18] a post office and sorting office and a telephone exchange which supplies broadband internet connection. Handley is visited by the local library van and is on local bus routes. Handley is not on mains gas. 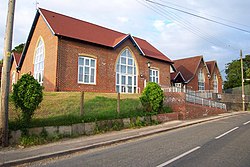 Handley has a first school which takes children for reception and years one to four. Children generally feed into Cranborne Middle School and then Queen Elizabeth's School in Wimborne Minster.

The community magazine is "The Downsman".[20] The magazine includes news, articles it is supported by advertising and the Parish Council. The church magazine "The Seeker" is a four-page insert in The Downsman.

Most years see Handley host some sort of street party. For 2014 the Sixpenny Handley Waistcoat Festival[21] Committee has secured Heritage Lottery funding for an event remembering the Great Fire of Handley 1892[6][7] and the generosity of well-wishers, without whom the people of Handley would have suffered great hardships.