Shirley is a village in the south of Hampshire, to the west of Southampton, which has become a suburb of the latter city. It is a residential village, but also the most important suburban shopping area in the west of the city.

Housing is a mixture of council houses in the centre of the district surrounded by private housing, with larger suburban houses concentrated in Upper Shirley. Shirley is separated from Highfield by Southampton Common, a large green public space.

The name Shirley is from the Old English scir leag, meaning 'bright meadow'.[1]

Shirley is recorded in the Domesday Book as a manor with a mill; the mill standing to the west of the present Romsey Road/Winchester Road junction, at the confluence of the Hollybrook and Tanner's Brook streams. Shirley Mill had three large ponds, to the north of Winchester Road. One of the three mill ponds remains today, accessed by following the Lordswood Greenway.

In 1228, Nicholas de Sirlie, lord of Shirley, surrendered rights to Southampton Common in return for a small payment and the agreement that the Burgesses of Southampton had no rights of common over the land that would later become Shirley Common.[2] In the nineteenth century an iron works was built, which was converted into a brewery in 1880 and subsequently into a laundry at the beginning of the 20th century. The laundry was owned by Royal Mail and used to service the mail ships visiting Southampton.

The stream from the mill crossed over the Romsey Road until it was culverted under the major traffic junction, and thence continues to the River Test to the east of modern Tebourba Way, open in parts and culverted in others. A second mill was built at what is now the junction of Oakley Road and Tebourba Way. This site was later a paint factory known as Atlantic Works and mill buildings survive in commercial use on both sides of Oakley road astride the old mill leat.

The district grew rapidly in the 1830s following the enclosure of Shirley Common.[3] The Hampshire Chronicle announced in April 1830 that "Several elegant villas are about to be erected on Shirley Common".[4][5]

On the 28 November 1830 in the context of the Swing riots there was a non-violent protest in Shirley and Millbrook by labourers demanding increased wages.[6] The parish church was built in 1836.

A council estate was built in the 1960s to replace relatively dense terraced housing.

Shirley and Freemantle Local Board of Health 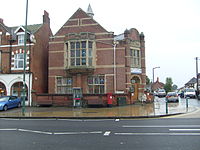 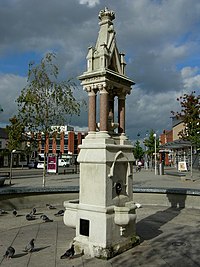 Drinking fountain in the shopping precinct 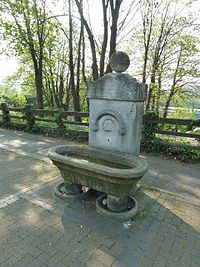 The Shirley Local board of health was established in 1853 and it took in Freemantle also in 1880. There was a brief Shirley and Freemantle Urban District Council in 1895, between on 2 January and 8 November in that year, when the village was absorbed into Southampton's municipal boundaries.[7][8][9]

In 1885 the Board acquired as its headquarters house named 'Ravenswood' on Church Road.[10] The house and its contents had been sold by the owner, Mr Gabriel Scott, on his bankruptcy.[11] who was, however, still living there in 1876.[12] It later became the headquarters of the Seventh-day Adventist Church in the British Isles.[13]

In 1887, the Board constructed a drinking fountain to celebrate the Golden Jubilee of Queen Victoria. Originally in Shirley High Street, the fountain has now been incorporated into the shopping precinct. The fountain is Grade II listed.[14] Another was constructed at Fourposts.[15]