Selly Oak is a suburban town in Worcestershire within the continuous conurbation spread from Birmingham. The town is bordered by Bournbrook and Selly Park to the north-east, Edgbaston (Warwickshire) and Harborne (Staffordshire) to the north, Weoley Castle and Weoley Hill to the west, and Bournville to the south. The Worcester and Birmingham Canal and the Birmingham Cross-City Railway Line run along the northern boundary of the area.

The name Selly is derived from variants of "scelf-lei" or shelf-meadow,[1] that is pasture land on a shelf or terrace of land. Selly Oak appears in the Domesday Book as Escelie.[1]

The Oak element of the name comes from a prominent oak tree that formerly stood at the crossroads of the Bristol Road and Oak Tree Lane/Harborne Lane. The original spot is still commemorated by an old Victorian street sign above one of the shops on the north-side of Oak Tree Lane, which declares it to be "Oak Tree Place" and has the date of 1880.[2] 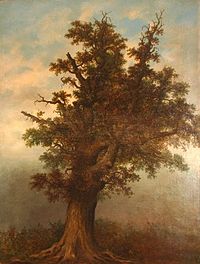 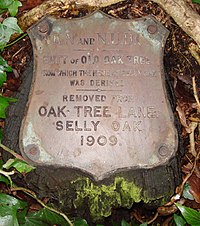 Brass plaque: "Butt of Old Oak Tree from which the name of Selly Oak was derived"

The Oak that stood here was finally felled in May 1909 amid fears about its safety, due to damage to its roots caused by the building of the nearby houses. The tree was cut-up and the stump removed to Selly Oak Park, where it remains to this day, bearing a brass plaque that reads "Butt of Old Oak Tree from which the name of Selly Oak was derived. Removed from Oak Tree Lane, Selly Oak 1909".[3] By 2011 the stump had become quite rotten and the brass plaque was no longer secure. It was removed by the Friends of Selly Oak Park and replaced with a replica plaque. The original was retained by the Friends for conservation. The remains of the stump were left in the park.

The earliest attestations for the name 'Selly Oak' date from 1746, and come from the manorial court rolls for the Manor of Northfield and Weoley, of which the district of Selly was a part.[4] The stump of the old oak in Selly Oak Park was examined using dendrochronology, and the results gave a date of 1710-1720 for when the tree began growing.[5] It is therefore thought that the tree became a landmark following the turnpiking of the road from Bromsgrove to Birmingham (now the Bristol Road), which began in 1727.[6]

An older name for the same crossroads, where the road from King's Norton to Harborne (now represented by Oak Tree/Harborne Lanes) met the Bromsgrove to Birmingham road (now the Bristol Road), appears to have been Selly Cross; at least this is what it was called during the 16th century when it was recorded as Selley Crosse in 1549 and Selley Cross in 1506.[7] 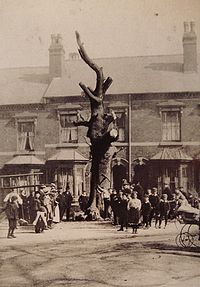 The supposed tradition that the original oak was associated with a witch named Sarah or Sally is without foundation,[8] and is likely to have arisen as a means of explaining what may have been a variant and local pronunciation of the name as 'Sally' Oak.[9] Indeed, the name is actually recorded as Sally Oak on a canal map produced by John Snape in 1789.[10]

In March 1985, a 'new' Selly Oak was planted by local councillors on the north side of Bristol Road on the small triangle of land between Harborne Lane and the Sainsbury's site, following road improvements to the junction.[11] A second 'new' Selly Oak was planted in October 2000 at Bentella's Corner on the south side of Bristol Road, on the opposite side of Oak Tree Lane to the original site.[12] In addition, there may also have been a third planting of yet another 'new' Selly Oak, next to the extension to supermarket car park, after the demolition of The Great Oak pub in 1993. 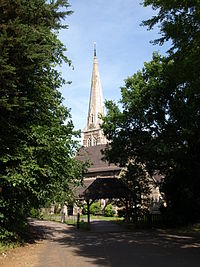 George Richards Elkington put up most of the money to build St Mary's Church on Bristol Road in 1861, built by the Birmingham architect Edward Holmes. There are several Elkington Burials in the Churchyard, including George Richards Elkington and his wife Mary Austen Elkington., and Brass Plates to Commemorate them within the name of the church. These rather amusingly show the couple with Victorian fairstyles and a mixture of Victorian and mediæval clothing.

Both Selly Oak and Bournbrook are served by Selly Oak railway station on the Cross-City Line, providing services to the Birmingham New Street, Lichfield Trent Valley and Redditch stations. It was originally built as part of the Birmingham West Suburban Railway, who agreed a land rental deal with the Worcester and Birmingham Canal to allow construction. It opened in 1876 as a single track line, running from Birmingham New Street to Stirchley Street. Bought out by the Midland Railway to allow their trains to pass through Birmingham without turning having used the Camp Hill Line, they extended the tracks south to a junction south with the Birmingham and Gloucester Railway at Kings Norton, and double-tracked the entire line length. The line was slightly realigned in the early 1930s, and the stub of the old alignment is still visible next to the current bridge over the Bristol Road.

The former Bristol Road tram route and its depots were replaced by buses in 1952.[13] The original tram sheds were demolished in about 2005 for flats, whilst Selly Oak bus garage was closed in 1986 and converted into a self-storage depot in about 1990.[13]

There were a few local factories such as Elliotts and the Birmingham Battery and Metal Company. The first transatlantic cable was made in Selly Oak.

Edward Monks boat building yard was in Selly Oak at the junction of the Dudley Canal and the Worcester and Birmingham Canal.

The BBC Drama Village is situated in Selly Oak, together with the Mill Health Centre where the BBC's daytime soap Doctors is filmed.

Selly Oak itself was blighted for a large part of the 20th century by a road-widening scheme for the Bristol Road (A38). In the latter half of that century, many historic buildings were demolished around the Bristol Road at the heart of old Selly Oak. However, plans for significant regeneration of the area were confirmed in 2005.

A new mile-long stretch of road was opened in August 2011 to alleviate the heavily congested Bristol Road through both Selly Oak and nearby Bournbrook, with improvements to public transport and other facilities in the district. The scheme includes a new canal aqueduct to carry the Worcester and Birmingham Canal and a new railway bridge on the Cross-City Line, and allowance has been made for the reopening of a small part of the Selly Oak to Lapal and Halesowen canal (Dudley No. 2 Canal) to enhance the area and provide a focal point. This scheme is paving the way for the University of Birmingham accommodation scheme, with the second phase (demolition) starting in March 2013. Compulsory evictions are set to start in January 2013. 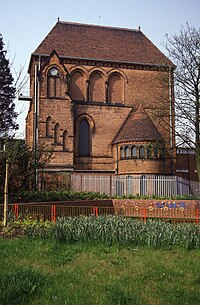