Scorrier House is a country house near the village of Scorrier in Cornwall. It is the seat of the Williams family of Caerhays and Burncoose. The house is surrounded by a garden renowned for its rich variety of exotic plants and attached to the estate is the Scorrier House Stud.[1]

Scorrier House was built in 1778 by John Williams the 3rd (1753 – 1841), the first son of Michael Williams the 1st (1730 – 1775) and Susanna Harris (died 1814). John Williams was described in 1868 as "one of the most extensive and most successful managers of mines, as well as adventurers, the county ever produced".[2] He pioneered many industry innovations, including the construction of the Great County Adit and the Portreath Tramway which was the first such railway of its time and now forms the Portreath – Devoran Coast to Coast Mineral Tramway Trail.

After Michael Williams, John's second son, made a fortune from speculating on the price of tin in 1845, he significantly enlarged Scorrier House, building the stately east façade overlooking the park. Parts of this enlargement were gutted during a fire in 1908, but it was rebuilt in that same year with the introduction of much teak and concrete as further precautions against fire. 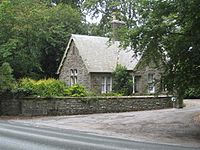 Lodge at the entrance to Scorrier House

During a national currency shortage in the early 19th century, John Williams took the initiative to pay workers in his own Cornish currency mined from his own mines. The Scorrier Penny was issued in 1811 and 1812 and bore the words, "PAYABLE IN CASH NOTES AT SCORRIER HOUSE".[6] Many of the tokens are now on display at the Royal Cornwall Museum.

Scorrier House is licensed for civil weddings and can be hired for wedding receptions, private parties and corporate events.[7] The staterooms of the house can accommodate 160 people in total and up to 110 people can be seated in one room for a meal.[8]

The gardens at Scorrier House are notable, particularly due to the influence of William Lobb, a famous Victorian nurseryman, botanist and plant hunter, who worked for the Williams family.[12] Lobb repeatedly ventured to the Americas on botanical expeditions and introduced many new exotic species to the United Kingdom. As a result, the gardens of Scorrier House contain many unique species, including Britain’s tallest Monkey-puzzle tree (Araucaria araucana).[13]

Within the gardens are also Cornish Crosses, an extensive camellia wall, a folly dairy and a quartz grotto garden.

The gardens are opened to the public by appointment.[14]