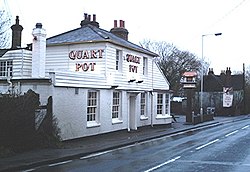 Runwell is a village and parish in the Chelmsford hundred of Essex, on the A132 road near Wickford.

The village is surrounded by neighbouring parishes such as Battlesbridge and Rettendon. According to the 2011 Census the total population was 3,394 with 1,658 males and 1,736 females living in the parish.[1]

Runwell Community Primary School and St Mary's Church are located in Runwell. Runwell Hospital was closed in 2010 and partially demolished in 2012. The site is being transformed into a housing estate consisting of around 580 new homes as well as non-residential space.[2] The village also has a Pre-school and two pubs; the Quart pot and Toby Carvery Runwell. The closest railway station to Runwell is Wickford railway station and the number 15 bus runs from Runwell to Basildon.[3]

Runwell has had inhabitants dating back to the 13th century when the church was built. In 1870-72 the imperial Gazetteer described Runwell like this:

According to the 1801 census, the parish had 243 people living in it.[5] The parish grew steadily in every census after that. The village has always been a majority agricultural intensive area in terms of its employment of its inhabitants with a huge amount of the population working in agriculture in the 1831 census.[6]

In 1824 Runwell was subject to a robbery headed by a man with the name of John Turner who knew of a farmer in Runwell by the name of Samuel Robinson who kept large amounts of cash on the premises. "After the heist over £15 in cash was stolen which they divided among them, and nine bottles of gin and brandy which they quickly began to consume". It is not clear how Turner was arrested, but on 21 December 1827, he was executed at Springfield Prison.[7]

During the war Runwell was used as an evacuation point for children from major cities for their protection. The area, like all of Britain, was heavily bombed due to the air raids. one account of growing up in Runwell was from a 12-year-old boy who described the time as such "As we had no air raid shelter, our beds were raised up on bricks, with another mattress on the floor. When the raids got bad, we went under our beds, hoping the upper mattress etc. would protect us from any debris" showing the extent to which Runwell was bombed during this period.[8] When the war ended, like everywhere else in the UK, Runwell celebrated. One account of the festivities was as such "There was great rejoicing when the War eventually ended, with bonfires, fireworks and street parties. I don’t know where the fireworks came from because once the war had started there was no more Guy Fawkes Bonfire Night, and as for the street parties, I think the mums had been saving food for just that event." [9]

Runwell's local football team is Runwell Sports FC, formally known as Runwell Hospital, and was established in 1946 by two former staff members of the hospital. The team plays in the Essex Olympian League and has youth teams operating at under-8 level upward.[10] The parish also contains the Runwell sports and social club which "was established over 70 years ago to provide sports and recreation facilities to the staff of Runwell Hospital".[11] The sports club hosts a range of activities from football, rugby, archery, bowls, snooker and a model flying club. It has also recently installed a state of the art 3G floodlit all weather sports pitch.

The local church in Runwell is St Mary's and is located in the centre of the parish on Runwell road. The building is a mediæval structure and is a grade II listed building. The church is maintained by members of the congregation and over the last decade the interior of the building has undergone significant repair and restoration. The church is also used as a "resource for local schools and colleges and has hosted retreats from other Parishes".[12]