Roxwell is a village and parish in the Chelmsford hundred of Essex. The village is approximately four miles west of the centre of the county town of Chelmsford, and to the south of the A1060 road, on which are the parish hamlets of Boyton Cross and Chalk End. Further Roxwell hamlets are Peppers Green at the north of the parish and Radley Green at the south. 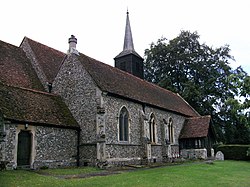 St Michael and All Angels' church

The Anglican parish church of St Michael and All Angels dates from the 14th century and is a Grade-II* listed building.[1] There is a primary school called Roxwell Church of England Voluntary Controlled Primary School which is linked to the local Anglican parish church,[2] the Chequers public house, and a village store and post office.

"a parish, with a village, in Chelmsford district, Essex; on the river Chelmer, 4½ miles W by N of Chelmsford r. station."[3]

Overall, Roxwell's population has grown over the last 200 years. From 1800, population was gradually increasing. For 50 years it increased with few fluctuations, but then started to decrease. Eventually population was back at the same level as it was in 1800 of around 650 people in this area. However, after this point, population slowly started to increase and then following the end of the Second World War in 1946 there was a baby boom. This meant that population reached its peak around 1960 at just over 1,200 people, but then declined rapidly. However, looking at the data from all previous census' dating back to 1800, and specifically at the 2011 census, it is continuing to grow at a steady rate to just over 1,000 people.