Rousham House (also known as Rousham Park) is a country house at Rousham in Oxfordshire. The house, which has been continuously in the ownership of one family since it was built.

Rousham was built around 1635 for Sir Robert Dormer and remodelled by William Kent in the 18th century in a free Gothic style. Further alterations were carried out in the 19th century.

In the 1630s Sir Robert Dormer bought the manor of Rousham. He immediately began construction of the present house but work was halted by the start of the Civil War. The Dormers were a Royalist family and the house was attacked by Parliamentary soldiers who stripped the lead from the newly completed roofs, according to family tradition. Royalist soldiers certainly looted the village and Rousham House in 1644.[1]

In 1649 the estate was inherited by Robert Dormer's son, also Robert. He left the house much as his father had created it, only repairing the damage of the Civil War. However, he did more to restore the family fortunes by marrying twice, each time to an heiress. His second wife was the daughter of Sir Charles Cottrell, a high-ranking courtier of Charles II.

Colonel Robert Dormer-Cottrell, the grandson of the house's builder, inherited Rousham in 1719 and began the huge transformation of the gardens to its current appearance. Initially he employed Charles Bridgeman to lay out the gardens in the new and more natural style that was becoming popular. Bridgeman's layout of the garden was completed circa 1737. Rousham was then inherited by the Colonel's brother, General James Dormer-Cottrell. He called in William Kent to further enhance and develop the garden that Bridgeman created. This Kent did with considerable success over the next four years. In 1741 Sir Clement Cotterell inherited the estate. [2]

At this time Kent also embellished the house itself, with crenellations and two wings containing a drawing room and a "delightful" library, according to Horace Walpole who said of Rousham in 1760 "it reinstated Kent with me; he has no where shewn so much taste".[3] The interiors were altered a century later but the hall, the principal room of the house, has survived alteration by successive generations unchanged, and remains as completed in the 17th century. Kent's exterior work is today almost as built, but in 1876 the original octagonal paned glazing was replaced with innovative large sheets of plate glass, during a heavy-handed restoration of the house by the architect James Piers St Aubyn. The house contains fine collections of Jacobean and 18th-century furniture, paintings and statuary, all displayed in a domestic setting.

The gardens, created by Bridgeman and then Kent, overlook a curve of the River Cherwell. Bridgeman had laid out the layout of the garden, with meandering walks through the woods, and pools of varying degrees of formality. Kent's theme was to create and transform the natural landscape created by Bridgeman into an Augustan landscape to recall the glories and atmosphere of ancient Rome. Thus the Roman Forum was to be recreated in the verdant English countryside. "The garden is Daphne in little, Walpole told George Montagu:"the sweetest little groves, streams, glades, porticoes, cascades, and river, imaginable; all the scenes are perfectly classic."[3]

The house and garden today 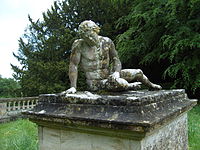 Away and unseen from the house Kent's garden extends past classical temples, follies and statuary representing the spirit of that era, dying gladiators, a horse being savaged by a lion and other statues depicting similar themes. Paths lead through woods where the abundant water from the Cherwell is fully utilised: small rills lead to larger ponds and formal pools, classical statuary of Roman gods and mythological creatures are skilfully positioned to catch the eye as one progresses from a cascade to the cold bath and on to the next temple or arcade, each set in its own valley or glade, a succession of picturesque tableaux.

Among the most revealing and thought-provoking of the follies is a grotto with a small cascade with the inscription: "In Front of this Stone lie the Remains of Ringwood an otter-hound of extraordinary Sagacity": this shows that while the English squire who created this garden attempted to achieve Arcadia, his interests and loves remained hunting and hounds.

A separate garden closer to the house evokes the spirit of the Tudor and Stuart eras of gardening. Box-edged beds and borders of old roses and herbaceous plants are surrounded by walls of ancient red brick; here an historic circular dovecote still retains its doves and close by through a small gate is the parish church where generations of Cottrell-Dormers are buried. One memorial in the church commemorates three sons of the family killed in combat in the First World War.

The house and grounds have been used as filming locations for productions including ITV's Lewis (episode "The Dead of Winter").

Rousham House is still the home of the Cottrell-Dormer family.